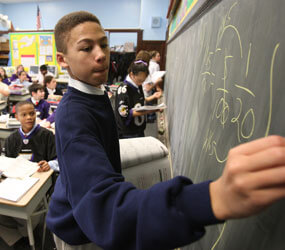 PARKVILLE- Standing in St. Ursula School’s library with his classmates, third-grader Blessy Mbaya had the look of a boy who just entered a toy store.

His eyes ballooned with excitement on Jan. 7 after his teacher gave him a simple, “Go ahead!”

“Reading is really exciting,” Blessy said after finding a mystery series called “The Secrets of Droon.”

Students from all learning spectrums have been enthusiastic at St. Ursula, a Parkville institution, since it opened 60 years ago.

Earlier in the morning, specialized reading instructor Joanne Barfaro was building confidence in several fourth graders as they learned about whales. Barfaro helps lead a program that identifies learning differences among students.

“Hopefully, if we can put in the right intervention, we can move out into the classroom once we catch them up,” Barfaro said.

There is a reason for such blossoming programs, and Blessy has his finger on the source: Sister of Notre Dame de Namur Joan Kelly, St. Ursula’s principal.

He offered joyfully: “She’s the best principal ever!”

School board president John Kogler said that leadership is a key ingredient.

“She deserves the credit for the school being as strong as it is,” he said.

Sister Joan arrived at the parish-supported school 25 years ago when there were just 370 students.

Enrollment at St. Ursula has been fairly steady, as there are 655 students. The school is not invulnerable to outside forces, however, as it had 700 students two years ago and once had a waiting list like many schools.

He routinely hears stories from parishioners after Mass saying they were laid off from their jobs.

“One thing Catholic schools have done very well is educate people from sort of lower-middle class families and move them into the next strata of society,” Monsignor Farmer said. “Catholics now occupy a lot of leadership roles around the country – politics, business, everything. Some of these people have been very, very generous. If we have to close schools, that’s not going to happen anymore.”

St. Ursula is doing everything in its power to keep the school more than relevant in the 21st century.

“Catholic schools need to stress Catholicism,” he said. “Religion’s got to be first. It’s proclaiming who we are proudly,” Monsignor Farmer said.

As an example, Monsignor Farmer talked about three pro-life buses going to the National March for Life in past years.

He added: “Many people who have sort of dropped out of the faith become more serious about their faith once they have children, particularly when children reach school age. That’s why Catholic schools provide an excellent opportunity for evangelization.”

Religion classes are an integral part of the school day, which also begins with a prayer.

St. Ursula students receive Spanish instruction starting in first grade, according to teacher Maria Lopez. She said students learn the Sign of the Cross, the Hail Mary and the Our Father in the language.

“There’s a big prayer life at the school,” kindergarten teacher Gail Froeb said. “A lot of these children only experience religion through here.”

Sixth-grade teacher Kathy Bivons said being proudly Catholic is what pulls people into the school.

“Parents are very committed and supportive of our school,” Bivons said. “Even those who aren’t Catholic want their child to be in a Christian environment. That’s what makes St. Ursula thrive in my opinion.”

The days of mimeographs and chalk and eraser appear to be coming to a close.

Assistant principal Lisa Madgar used the boards during a recent religion class when telling the story of Moses. Students answered a crossword puzzle on the screen after learning various facts of Moses’ life.

Madgar smiled after a class full of participation: “This is fun, isn’t it?”

Eighth-grade teacher Thomas Smith keeps things lively inside his classroom. His students recently prepared facts about European countries and performed in mock television shows about them. They reviewed their shows to see how comfortable they were on camera.

Froeb has been at the school for 23 years, while fellow kindergarten teacher Theresa Fifer has 22 years at the school. Young teachers like Julia Zimmerman bring new twists on old English class standards.

“This school is like family, and I’m not lying to you,” said Lopez, a 13-year faculty member.

St. Ursula operates with a budget of $2.4 million according to Sister Joan. A good portion of that money, she said, goes toward the faculty and staff.

Monsignor Farmer said external circumstances, like the increase in energy rates, have hit his school hard. Insurance premiums have only compounded the problem, according to Monsignor Farmer.

“I want to say this: Catholic schools are worth the cost because so much good comes out of them,” he said. “Our children are getting more than just an education. They’re getting a foundation for leading a good life.”

St. Ursula prides itself on keeping tuition low. For the 2009-2010 school year, parishioner tuition for a single child attending kindergarten through eighth grade full day is $3,900. As more children attend the school the tuition rates get adjusted. For non-parishioners, full-day tuition is $4,875.

Families can get a $400 reduction in tuition through a service time component. Families help improve the school through painting, cleaning and installing ceilings and projectors.

The athletic program at St. Ursula is particularly active with parents serving as coaches.

St. Ursula has shunned Catholic school fundraising staples like chocolate and pizza sales in favor of a Harvest Festival and a race for education.

The school-wide race brought in nearly $60,000 last year, according to Sister Joan. The harvest festival always has the entire school community buzzing.

“You can’t have a kid in the school and not participate in it,” she said with a laugh. “They love it.”

One of the major components of St. Ursula’s viability studies over the years has been a strong school board.

Currently, it has 10 voting members who have financial, technical, development know-how who serve in an advisory capacity. Monsignor Farmer, Sister Joan and kindergarten teacher serve in a non-voting capacity. The board also has nearly 10 committees that utilize parents as well.

Kogler said the finance committee has been a major recent success.

“We think about how can we grow enrollment and market the school better,” board president Kogler said. “Enrollment is what it’s all about. We have one of the lower tuition rates in the archdiocese and we’ve been able to do that by protecting the enrollment number.”

The principal is at every meeting, Kogler said, and is “actively involved.”

“Everything she does is about the kids,” Kogler said.

Kogler said most members of the board serve as chairs for the various committees. He said he wants to increase the total board membership to about 15.

Most of the board, he said, consists of parents. Kogler’s three children have attended the school.

“For me, the school board is a tremendous support,” Sister Joan said. “My expertise is education, not finances, technology or construction. To have people who can take that input and make decisions is a great help.”