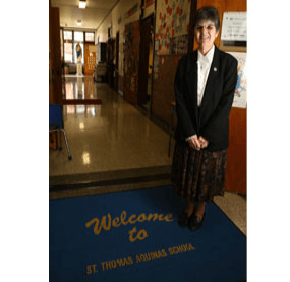 The following profile of Sister Marie Rose first appeared in the Jan. 28, 2010 issue of the Catholic Review.

St. Thomas Aquinas principal is a mother for all

School Sister of Notre Dame Marie Rose Gustatus once dreamed of having a big family with many children.

As the 67-year-old principal of St. Thomas Aquinas School in Hampden recently reflected on her life, everything came into focus.

“Now,” she said inside the living room of St. Thomas’ convent, “I look back and think, ‘How many lives have I touched because of this vocation?’ “

Sister Marie Rose is celebrating her 30th year as principal of the elementary school, which currently serves students in pre-kindergarten through eighth grade.

St. Thomas Aquinas parish held a reunion Mass that also celebrated Sister Marie Rose’s years of service. Seeing former students is nothing new for the longtime principal. On a mid-December morning, a graduate brought her own child to Sister Marie Rose’s office to visit.

“That’s really a neat feeling to have,” the principal said. “I consider these my grandchildren now. This is a family-oriented school. A lot of their mothers and fathers, I had when I first came here.”

The West Baltimore-native attended St. Cecilia’s School and then St. Martin’s High School. Soon after graduation, she contemplated becoming a nun. Sister Marie Rose didn’t know which order to join, so she sent letters to all of them.

“To be honest, the School Sisters of Notre Dame responded first,” Sister Marie Rose said. “I just picked up and went with it. I knew they were a teaching order and I knew that I liked children and I thought I’d like to teach.”

She took her first vows in 1962 and the fact that she’s two years shy of 50 years makes her stop and say, “Has it really been that long? It doesn’t seem that long. As you get older, life moves faster.”

She studied at the College of Notre Dame (now Notre Dame of Maryland University) and knew she wanted to teach about God and give to others. Sister Marie Rose never dreamed that she would become a principal. She first taught at a first-grade teacher in Pittsburgh for eight years and then returned to the Archdiocese of Baltimore.

She became first-grade teacher and vice principal at St. Mary’s of Annapolis.

The late School Sister of Notre Dame Joanice Giebel, then principal at St. Mary’s elementary school, recognized leadership traits in Sister Marie Rose, who had a fear of public speaking.

“I thought, ‘How will I ever get up in front of parents and speak to them or children? What will I do? I don’t think I’ll be able to handle it.’ “

Still, she took the leap when St. Thomas Aquinas’ principal position opened up. At the time, it served first through fifth grade. It has become a pillar of the community under her leadership.

Every day begins the same for Sister Marie Rose. She wakes and walks over to the school from the convent building she has lived all 30 years. She opens doors and turns on lights before going to daily 7 a.m. Mass.

She approaches education the way Sister Joanice did back in the 1970s – in an organized, caring fashion.

“I do know that every time I do something, it’s because it’s what she did,” Sister Marie Rose said. “It worked back then, and it works now.”

She gets particularly excited when she walks into a first-grade classroom and sees minds ready to be molded.

First-grade teacher Mary Cutter, who arrived a year after Sister Marie Rose, said the principal has created a nurturing environment.

“I think that is why so many of us have been here for so long,” Cutter said. “It’s because of her. She really does live her profession of the School Sisters.”

This article was originally published Jan. 28, 2010 at CatholicReview.org