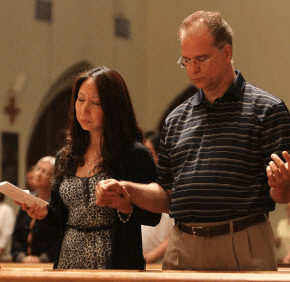 That’s the amount of time each week couples should dedicate to their marriage if they want a happy relationship, according to Christine Snyder, a licensed clinical marriage and family therapist.

Holy Family in Davidsonville is trying to help make that time happen. Snyder presented principles for happy marriages during her parish’s “date night” for married couples in May that concluded with dinner at a nearby restaurant.

On Sept. 29, Snyder will present the second part of her series to help couples improve their marriages, which will focus on assertive communication and apologizing.

It is important for couples to spend time on dates and focusing on their marriages, said Holy Family’s pastor, Father Andrew D. Aaron. However, he finds that scheduling parish events and drawing a crowd face one of the same challenges as the modern-day marriage: people are so busy.

Other churches and organizations are helping couples find that time. Locally, St. Ursula in Parkville is planning a date night event in October, after its first one in April was deemed a success, according to its organizer, Deacon Michael Baxter.

The National Marriage Project at the University of Virginia in Charlottesville, Va., says initiatives like these are on to something. In February, it published a report titled “The Date Night Opportunity.” It found that couples who devote one-on-one time to each other at least once per week are more likely to have high-quality relationships and lower divorce rates.

The U.S. Conference of Catholic Bishops’ For Your Marriage campaign applauded the findings. ForYourMarriage.org advises couples to take dates weekly and offers low-cost options such as competing in a backyard croquet match or exploring a city by riding a public bus for the whole route.

A papal message signed in July by Cardinal Tarcisio Bertone, Vatican secretary of state, said going to Mass together and setting aside time each day to talk to each other are two simple practices that can help Catholic couples strengthen their marriage and be examples to others.

The best date nights go beyond the stereotypical dinner and a movie, according to The National Marriage Project, whose research shows that couples whose dates are novel, fun and active have higher quality relationships.

A mental health counselor at Goucher College in Baltimore, Snyder based her presentation in May on the research of John Gottman, a Seattle-based psychologist and marriage expert whose findings include the “magic” five-and-a-half-hour weekly minimum couples need to dedicate to their marriage.

Couples often have little information on how to get along well with their spouse when they marry, but working to improve communication skills can help them improve their relationship, she said. She strongly recommends Gottman’s book “The Seven Principles for Making Marriage Work” for every engaged and married couple.

Snyder suspects the couples who attended the May event had solid relationships, since they took time to invest in their relationship. She hopes future events also attract and benefit couples whose marriages are in distress, and encourage them to seek counseling, she said.

“You’re worth it,” she said of marriage counseling. “You made this commitment to be together for life, and your couple is worth it. You need to make that investment of time and energy and be willing to be vulnerable to the extent necessary to have successful couple’s counseling.”

“Making Your Marriage Better” will be held Sept. 29, 5-7 p.m. in classrooms 12 and 13 at Holy Family in Davidsonville. Free babysitting will be provided from 5-9 p.m.to allow couples to go out for dinner following the presentation. To register, contact Steve Cox at adulted@hfccmail.org. To sign-up for babysitting, contact Jeanne Collins at rcpt@hfccmail.org.