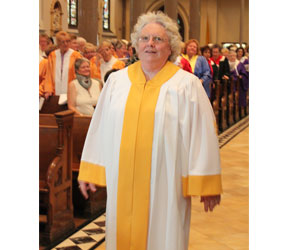 It would be hard to find a woman more prepared to lead the Catholic Daughters of the Americas than Anne B. Nelson, a parishioner of St. Philip Neri in Linthicum with a record of more than five decades of service in the organization.

“I see the Catholic Daughters as a gift to my life as much as they are a gift to our country and the world,” said Nelson, who began a two-year term as national regent-elect of CDA Aug. 16.

After being elected at the group’s national convention in Buffalo, N.Y., earlier this year, Nelson is second-in-command among five national officers who determine policy and administer the organization nationally.

In August 2012, she will automatically replace current national regent Joanne Tomassi and lead the Catholic Daughters, who have more than 90,000 members in 45 of the United States, Puerto Rico, Mexico, the Dominican Republic, Guam and the U.S. Virgin Islands.

Nelson started her career with CDA in Pennsylvania in the Juniorette program, for girls 6-8, and moved on to the Junior program through high school. When she turned 18, her mother persuaded her to become a full member of Court St. Mark in Bristol, Pa. in 1964.

She is a charter member of Court Mother Seton No. 2119 in Linthicum, where she moved up the ranks and went on to hold many state and national leadership positions.

Nelson taught for 25 years in the middle school at St. Philip Neri School. Most recently, she was director of religious education for the parish, before retiring in June to focus on her CDA duties, which require a lot of travel.

As regent-elect, Nelson works closely with Tomassi and has the authority to do many of the regent’s duties, such as signing contracts on behalf of CDA, which will help make the 2012 transition run smoothly.

CDA’s motto is “Unity and Charity,” and their patroness is the Blessed Mother. Members donate their time and money to charities, administer scholarship programs and strive “to be helping hands where there is pain, poverty, sorrow or sickness.”

Catholic Daughters are very involved in Habitat for Humanity, Habitat International in Mexico and Haiti, Smile Train, Right to Life and many of Mother Teresa’s charities.

“The national charities we help are the voice of our members. Each year we make the decision to add or delete charities based on what our members feel are most important,” said Nelson.

There are more than 3,000 Catholic Daughters in Maryland, and Nelson would like to see more women get involved. There are 14 campus courts at colleges throughout the country, including one at the University of Maryland College Park and another soon to open at the U.S. Naval Academy.

“Our numbers are dropping, but in the last four to five years we’ve stabilized,” Nelson said. “We’re a group of women that uses whatever talents God gave us to do whatever he needs to get done.

“The program is very diverse. The elderly or housebound can help out with prayer and making phone calls and addressing newsletters. We respect their opinions and our history, but we also open our eyes to new ideas. We adjust our programs to meet the needs of younger women.”

Nelson gains strength from the membership.

“What motivates me,” she said, “are the people who are the Catholic Daughters. I get to meet so many different people, and we share so many ideas and programs with each other. It’s been a beautiful job and a challenging job. It has definitely increased my faith.”