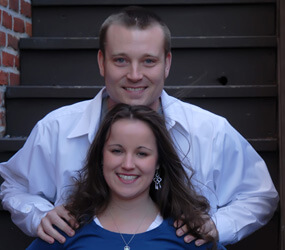 Anders Yanike has been sweeping Lauren Torbeck off her feet from the very beginning.

The two locked eyes three years ago as they were starting lindy hop swing dance lessons.

Weeks went by and Yanike consistently sought one dance partner above all others – Torbeck.

Alone with Torbeck inside St. Peter the Apostle Church in Libertytown, Yanike pulled a box containing a St. Therese of Lisieux rosary from his pocket. In the preceding weeks, Yanike had been going to weekday Mass three times a week to learn how to pray the rosary with parishioners.

Yanike explained what he had done and asked to lead her in prayer.

“I just started to bawl,” the 26-year-old Torbeck said. “I had always prayed and dreamed that the man who proposed to me would bring God into the situation.”

She never shared that sentiment, but Yanike always knew.

As they concluded their prayers, Yanike asked his girlfriend to stand and take a breath.

“Lauren, I want to be the man who leads you through,” Yanike said. “I want to be the priest of our relationship and of our marriage. Lauren Rachel Torbeck, will you marry me?”

Torbeck was crying and let out a “Yes, of course!”

When Yanike and Torbeck walked into the Walkersville town hall for lindy hop lessons in 2006, they were immediately drawn to one another.

“As soon I entered the room, it was like we spotted each other instantly,” said Torbeck, a speech pathologist at Washington County Hospital Rehabilitation Center in Hagerstown.

Through eight weeks of lessons, the two danced together regularly.

“My heart dropped and my face got all red,” Torbeck said of their dances together.

“She was always smiling,” Yanike added of his crush.

On the night of the final class, Yanike asked his partner if he could give her his e-mail address.

“I’ve never had a way with the ladies,” Yanike admitted. “It takes a bit of energy on my part to ask a girl out. I just liked dancing with her so much. I felt like that might have been my last chance.”

A series of e-mails and phone calls followed, which led to one nervous first date. Smoother ones ensued.

“I had never had such a crush on somebody,” Torbeck said.

The budding couple became regulars at Mass at her parish, St. John in Westminster, and his, St. Peter the Apostle. They deepened each other’s faith and talked about marriage from time to time.

He insisted that was years away. A plan, however, was underway.

Yanike prayed for guidance and then sought and received permission to propose from Torbeck’s father.

On the morning of Dec. 16, Yanike was loaned a key to the church by Monsignor John A. Dietzenbach, pastor of St. Peter the Apostle.

Later that evening, snow began to fall as he picked Torbeck up at her apartment. He brought a dozen roses and took her to a spectacular dinner.

Although Yanike told Torbeck that they needed to return to his Libertytown house to let his dog out, he was actually retrieving the engagement ring.

Yanike distracted Torbeck by humorously asking her to see out if his bathtub needed cleaning.

A few awkward looks from Torbeck later, Yanike said: “I bet my church is pretty this time of the year with the church (Christmas) decorations. You’re always saying you want me to be more spontaneous, so let’s be spontaneous and go look at them.”

Torbeck noticed a light on in the church as they arrived and thought that perhaps Monsignor Dietzenbach was praying inside. All the doors appeared locked until they passed a statue of St. Peter.

“Oh St. Peter if only I had one of your keys,” Yanike said as they approached the final door. “Oh wait, St. Peter lent me his keys.”

The couple stepped inside.

“OK,” Torbeck told him, “you have my attention.”

Yanike pulled out the rosary and the two began to pray.

“I was completely swept off my feet,” Torbeck said

“I’m looking forward to being with my soul mate, the person I’m meant to grow old with,” Torbeck said. “I love that he’s the one and can’t wait to be his other half.”