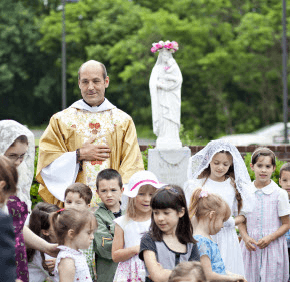 HANCOCK – The hills of West Virginia and Pennsylvania are visible from the cemetery behind St. Peter Parish, where weathered gravestones attest to the Catholic generations who have lived, worshipped and died in that thin stretch of mountain Maryland.

Hancock sits in the narrowest part of the state, where the Potomac River arcs north and less than two miles of Maryland separate West Virginia and Pennsylvania.

St. Peter and its mission, St. Patrick in Little Orleans, draw members from the tri-state area. Pastoral council chairman Richard Carrington, 67, lives seven miles away in Berkeley Springs, W.Va., where he and his wife, Kathy, moved eight years ago after retiring. Although many in the 180-family parish grew up in the area, parishioners are welcoming to new members, he said.

“There’s a great intimacy about (the parish), and people do care a great deal about one another,” he said.

Irish-American workers laboring on the Chesapeake and Ohio Canal established St. Peter in 1834 and St. Patrick, which is 18 miles away, in 1860. The parish operates as a single community at the two sites.

With only a few paid staff members, the parish relies on volunteers for everything from scheduling lectors to organizing the renowned apple dumpling festival, an annual parish fundraiser. It also collaborates with other local churches for social outreach and recreation, including a new summer softball league.

Father John Lombardi, the parish’s administrator, said that a small town such as Hancock – population 1,545 – lends itself to church collaboration. “You know more people and (communication) is more immediate,” he said.

In January, Civil War re-enactors positioned cannons on the land behind St. Peter and St. Thomas, the Episcopal church next door, to commemorate the 150th anniversary of Gen. Thomas “Stonewall” Jackson’s siege of the town. In 1862, Union troops fired cannons from a ridge behind the churches against the advancing Confederate army, and Jackson’s troops withdrew.

The parishes partnered with city officials to host the commemorative event.

The parish also teams with other churches for charitable outreach through the Interfaith Service Coalition. Each Christmas, the coalition distributes food and gifts to those in need through a program called “Christmas for Others.” In Hancock, parishioners often know the families they’re helping, and that spurs the drive’s success, Carrington said.

“It’s neighbor helping neighbor, and no judgments made,” he said.

Prior to his appointment to St. Peter and St. Patrick, Father Lombardi, 51, directed weekend retreats as chaplain of the Grotto of Lourdes in Emmitsburg. He now offers parish retreats and has led pilgrimages to Peru, Spain and an American Indian reservation in Montana.

“We do things like that to highlight diversity and to see the church as universal,” he said.

The parish also has an active youth group, a strong pro-life outreach and child and adult faith formation.

“We’re part of Appalachia, and you could think that’s getting gray and craggily, but we have a lot of dynamism and youthfulness,” Father Lombardi said.