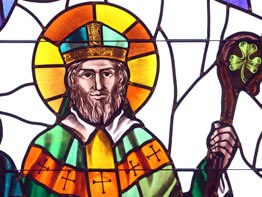 WASHINGTON – The long-held tradition of St. Patrick’s Day parades has experienced a bump in the road this year with the saint’s feast day occurring during an unusually early Holy Week.

In cities across the country most of the parades, some more than a 200-year-old tradition, are going on as planned, even though March 17 is the Monday of Holy Week. But the idea of marching bands, Irish dancing and vast displays of green parading during the solemn week before Easter has stirred some comments from U.S. bishops.

The question of how to celebrate the Irish saint is not usually such a dilemma, since the last time his feast day fell during Holy Week was in 1940.

Because St. Patrick’s Day falls just days before Easter this year the feast will not be celebrated liturgically in most U.S. dioceses, because of a decision by the Vatican’s Congregation for Divine Worship and the Sacraments.

A newsletter from the U.S. bishops’ liturgy secretariat last April announced that the feast day of St. Patrick may be moved to Friday, March 14, in dioceses “where St. Patrick is the principal patron of a particular church” and where “it is customarily commemorated as a solemnity.”

Bishop J. Kevin Boland of Savannah, Ga., the city with a huge St. Patrick’s Day celebration, made an early note of the feast day’s date change. In December 2006, he wrote dozens of letters to all involved in the city’s St. Patrick’s festivities, including the parade committee, city agencies, the Board of Education and the Chamber of Commerce, informing them the diocese would be celebrating the feast day March 14.

The Irish-born bishop never suggested the city change its festivities, according to Barbara King, spokeswoman for the Diocese of Savannah. She told Catholic News Service Feb. 21 that the bishop was simply “letting everyone know what he would be doing.”

Parade organizers decided that December to change the date of the 2008 parade to coincide with diocesan St. Patrick celebrations. Except for this year, Savannah’s parade, unlike those in some other cities, is always held March 17; in many cities the parade is often on the Saturday before the feast day.

John Forbes, the Savannah parade committee chairman, told the Savannah Morning News daily newspaper that the date change was fine with him. “We do have something special in St. Patrick’s in Savannah,” he said. “We’re going to stay in line with the Catholic Church. When they celebrate the Mass, we’re going to hold St. Patrick’s Day (festivities) the same time.”

In Ohio, Columbus Bishop Frederick F. Campbell’s request to city officials that the parade’s date be moved was not heeded.

In other cities, the bishops have chosen not to get involved in suggesting a date change for the parades or other celebrations. New York’s traditional parade will take place March 17 on Fifth Avenue. Boston’s parade will be March 16, which is Palm Sunday and also the first day of Holy Week. Dublin, Ireland, will host its St. Patrick’s parade as usual March 17.

Philadelphia and Milwaukee changed their parade dates to avoid conflicts.

Since the traditional parade date this year would have been on Palm Sunday, the parade organizers, way back in September 2006, made the decision to move the 2008 parade to March 9. The organizers noted that Philadelphia’s Cardinal Justin Rigali had “urged all parish priests to be with their own parishes and congregations” on Palm Sunday.

The city’s parade organizers also unanimously approved moving any future parades that would fall on Palm Sunday to take place the prior Sunday.

Milwaukee, seemingly without much fanfare or news coverage, changed its parade date to March 8 this year and one of the special guests will be Milwaukee Archbishop Timothy M. Dolan.

Cleveland was still planning its March 17 parade but the tradition of fife and drum bands marching into the city’s historic Irish-American parishes will not take place this year.

The parade conundrum for the patron saint of Ireland will not be faced again for some time. The next time St. Patrick’s Day is expected to fall during Holy Week will be in 2160.