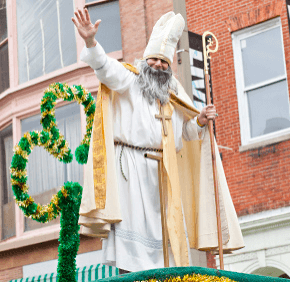 By Paul McMullen
Twitter@Review McMullen
The proverbial luck of the Irish prevailed at Baltimore’s St. Patrick Parade.
The affair, held annually on the Sunday before St. Patrick’s Day, was completed March 16 just a few hours before a winter storm dumped more than six inches of snow on the region and closed most schools in the Baltimore archdiocese March 17.
The parade included various Irish fraternal organizations with long-standing histories, and new ones, like the Friendly Daughters of St. Patrick, which was formed last year.
The Catholic schools of the Archdiocese of Baltimore had one of the largest floats, and The Catholic High School of Baltimore, the Institute of Notre Dame and Mercy High School all marched behind their own banners. Entertainment included marching bands from local institutions, such as Calvert Hall College High School in Towson, and ones from as far away as Allentown, Pa.
To view a slideshow from the event, navigate the arrows below.
See a photo you like? View the Catholic Review Smugmug gallery for purchasing options.
The grand marshal was John Schell, a parishioner of St. Ursula in Parkville, who helped pass a law in 2013 that established an Irish American Heritage Month in Maryland. The honorary grand marshal was Christian Brother Kevin Strong, former president of Calvert Hall.
Parade-watchers included Archbishop William E. Lori. The parade was preceded by a 5K footrace that numbered 4,900 entrants. It began a few yards south of the archbishop’s residence on Charles Street.
Also see:
For Irish dancing teen, prayer pivotal in world championship quest
Inside Sports: Alhambra basketball keeps bringing them back to Allegany County
PrevNext