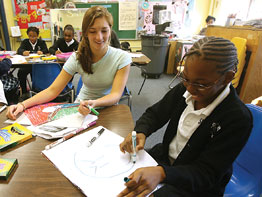 At a time when many Catholic schools are struggling to maintain their enrollment, the number of registered students at St. Mary of the Assumption School in Govans has zoomed to 170 – a 40 percent increase from last year.

Beyond marketing, Loyola has provided a strong educational presence in the school, recruiting more than 130 Loyola students in 30 academic departments to volunteer as teaching assistants and tutors at St. Mary. The college has also sponsored enrichment programs in the arts, science and athletics, while providing spiritual retreats, academic workshops and sports clinics on its Charles Street campus.

“It’s been amazing,” said Mrs. Phelan, noting that Loyola has equipped the school’s computer lab and offered speech and hearing screenings. Students who need speech pathology therapy can get it on a sliding pay scale from Loyola’s Clinical Centers, she said.

“In the past, people just didn’t seem to know about our school,” said Mrs. Phelan. “I think word of mouth is making us more known. It’s snowballing.”

A 1967 graduate of St. Mary, Mrs. Phelan said there were so many students attending the Govans school in the 1950s and 60s that students went to school in shifts with three grades in every class. As Catholic families moved out of the area in the decades that followed, enrollment dwindled and there were so few students in some grades that they had to be combined in recent years.

St. Mary today serves an inner-city population that does not have many educational opportunities, Mrs. Phelan said. While tuition is kept low – it currently stands at $4,150 – more than 88 percent of students receive tuition assistance. The school is supported with efforts like the archdiocesan Partners in Excellence program, but finances remain a huge hurdle, the principal said.

“These kids are coming from tough situations,” said Mrs. Phelan, pointing out that some of the students have family and friends who have faced drug or gang-related violence.

“We try to provide structure and security and a good academic program,” she said.

While only 5 percent of the students are Catholic, most of them come from strong Christian backgrounds and attend churches in the area, Mrs. Phelan said.

Because the school is using a new standardized testing program, it is too early to tell whether test scores have improved since the partnership was initiated, Mrs. Phelan said. But with students receiving one-on-one attention from Loyola volunteers, she believes students are benefiting academically.

“The Loyola students help us understand how to study and they give us different tips,” said Marvin, noting that he learned simple hand tricks from his tutor to make it easier to figure out some of his times tables.

“They’re fun and nice at the same time,” he said.

Father Linnane said the partnership has far exceeded his expectations.

“So many of the questions facing Baltimore are about giving young people realistic options to address the problem of poverty,” said Father Linnane. “We want to be a part of addressing questions of poverty and for us one of the answers is education.”

Volunteering at St. Mary has been “phenomenal” for Loyola students, Father Linnane said, providing them with invaluable practical experience. Asked if he would like to see St. Mary students attend Loyola in the coming years, the president said he “couldn’t think of a better outcome.”

“We bring them on campus a lot to make them comfortable with a college environment,” he said. “They see this is a possibility for them.”