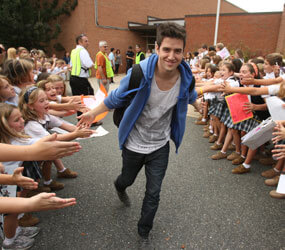 BEL AIR – When St. Margaret School eighth-grader Olivia Askey and her friends heard about a text-messaging contest that could bring one of America’s fastest-rising musical acts to their school, they rolled up their sleeves.

All they had to do was get fellow students to show school spirit in a contest, sponsored by Walgreen’s and CBS Radio, for the Bel Air institution to be one of nine nationwide school stops by their favorite band, Big Time Rush.

The schools with the most text messages were chosen. Some St. Margaret School students claimed to send up to 2,000.

“I was like, ‘I’ll just do it and see what happens,’ “ Olivia said. “There were so many schools I thought there was no way it was going to happen.”

The unlikely happened Oct. 12, as Big Time Rush made the 100-year-old school its first contest-related performance, just a day after appearing on NBC’s The Today Show.

The band provided a super-charged “rush” of adrenaline inside the school’s gymnasium by performing a handful of tunes from its album, “B.T.R.,” released Oct. 11.

“This reenergizes everybody,” said principal Madeleine Hobik. “It’s a positive beginning for the school year. It couldn’t have been a better event to celebrate the 100th anniversary.”

Hobik, who is new to the school, received a phone called from CBS Radio to tell her St. Margaret had won. She was shocked and quickly learned of how it happened.

Big Time Rush was created for a Nickelodeon children’s cable channel show that shares the band’s name. The group sings and dances much like “boy bands” of decades past – New Kids on the Block, N’Sync and The Backstreet Boys.

Before the concert, students in classrooms could be heard chanting the band’s name outside the school and signs adorned nearly every wall. Hollywood had come to Bel Air.

Members Kendall Schmidt, James Maslow, Carlos Pena Jr. and Logan Henderson elicited screams during their set. During one song, they invited the students to come closer to the stage. Hobik briefly worried that someone would get hurt. Instead, she saw the children’s best instincts emerge.

“It was wonderful seeing the children respond in such a positive way and see the values we teach displayed,” Hobik said. “The older ones really made sure the younger ones were taken care of when that happened.”

Fifth-grader Gregory Komondor had broken his ankle during a weekend soccer game. As he used crutches to hobble around the hallways before the concert, Big Time Rush walked past him and said, “Hey, what up, dude?”

Gregory explained his injury and asked if they would sign his cast, which they did.

“It was really neat,” he said. “It didn’t hurt as bad as I thought it was going to. I wasn’t going to say no to that. They were really nice. A lot of the kids in the class were really jealous.”

St. Margaret pastor Monsignor G. Michael Schleupner said the event was unlike anything he has ever seen.

“What’s impressive is the school spirit these kids had to do this,” Monsignor Schleupner said.

Students and staff chanted “B.T.R.” during the performance, screaming at a deafening pitch.

After the show, Olivia tried to compose herself. She was allowed to ask the band questions for the school’s newspaper, The SMS Press. She clutched a poster that would be signed by the musicians.

“It’s truly amazing,” Olivia said. “I watch them every night. I know all their songs. Just to see them live on stage? It’s so crazy!”

View a slideshow of the event HERE.