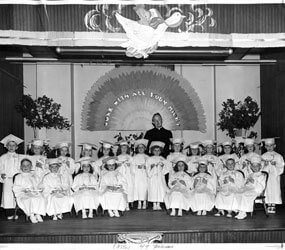 With an enrollment topping 780 and a staff approaching 100, St. Margaret School in Bel Air is one of the biggest schools in the Archdiocese of Baltimore.

It didn’t start out that way.

Founded May 1, 1911 – 102 years after St. Elizabeth Ann Seton opened the archdiocese’s first school in Emmitsburg – St. Margaret inaugurated its first year with just 42 students who met in a large white house. Two School Sisters of Notre Dame and a postulant took a train from Baltimore to staff the school.

Throughout its hundred years, whether big or small, St. Margaret has been a focal point for faith and academics. It’s a proud legacy the community will celebrate in the coming year and one the school’s many supporters hope will continue for another century or more.

“It truly is an institution of hope,” said Madeleine Hobik, incoming principal. “It’s a welcoming place that’s focused on Christ and the Gospel message. It’s a faith-filled family.”

Jane Dean, a former principal who served at St. Margaret as a teacher or administrator for nearly 30 years, said part of the secret of the school’s success is its support from the parish and its ability to change with the times.

St. Margaret was one of the first Catholic schools to establish a kindergarten program and it was also on the cutting edge when it began a pre-school in 1990.

When St. Margaret had long waiting lists in the late 1990s, the school responded by opening a new middle school campus and expanding enrollment to include three levels for each grade.

“It gave us the opportunity to make technology integrated into instruction,” Dean remembered. “We were also able to expand our library to make it the hub of the school at the middle school.”

Dean said Catholic identity has been integral to St. Margaret’s mission. The School Sisters made it a priority, she said, as did the lay administrators that succeeded them in the 1970s.

“It has been strengthened even more in recent years,” she noted. “Now, the children go to Mass every week on both campuses. The priests visit the classrooms and we have a strong outreach component in our curriculum. Students grow up with a strong sense of giving back to the community – locally and globally.”

Last year, students dedicated a peace pole on both campuses proclaiming “May peace prevail on earth” in four languages. As part of the centennial celebration, the school plans to kick off a campaign to establish brick plazas and gardens at the peace poles.

Ed Powers, an alumnus of St. Margaret whose four children have attended the school, remembered that the School Sisters and lay teachers both showed a sense of dedication to their work and their students.

“I still remember Sister Robertine,” he said with a laugh. “She knew when I was listening to an Oriole game as I was writing my journal. If it was done sloppily, she would make me redo it.”

Powers, whose wife has taught at the school since 1990, said parents are supportive of the school and appreciate the quality education their children receive.

“The people really seem to care,” he said.