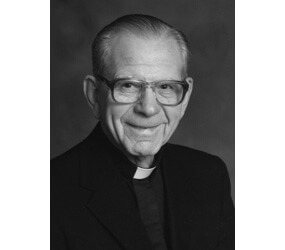 ST. LOUIS – Father Raymond H. Reis, a retired priest at St. Louis University who was a longtime professor and also had worked as a nurse, died July 19 at age 104 at his university residence.

He was the world’s oldest Jesuit.

According to the St. Louis-Post Dispatch daily newspaper, officials of the Society of Jesus learned from the order’s headquarters in Rome that Father Reis became the oldest member of the order after the recent death of A Jesuit in Mexico.

A funeral Mass was to be celebrated July 23 at St. Francis Xavier College Church, followed by burial at Calvary Cemetery in north St. Louis.

In 2005, when he turned 100, Father Reis told the university’s magazine: “I have had an enjoyable life and I have done a lot that I wanted to do. I used to like to travel, but now I have no plans. I just let things happen.”

Asked if he had any advice for reaching the century mark, he responded with a chuckle: “That’s something that’s a gift from God.”

Born March 25, 1905, in St. Louis, the young Raymond joined the Jesuits in Florissant in 1926 after college. He earned a doctorate in biology in 1940 at St. Louis University and went on to teach at Marquette University in Milwaukee and what is now Rockhurst University in Kansas City, Mo., both Jesuit institutions.

In 1956 Father Reis’ father, Valentine, donated 225 acres of land, mostly oak-hickory forest, to the university to establish the Reis Biological Station. Operated by the biology department to promote environmental and biological research and education, the station is located in the eastern Ozarks of Missouri, about 100 miles southwest of St. Louis.

Father Reis retired in 1973 but then returned to school, studying nursing at the university. Until 1992, when he retired for the second time, he worked as a nurse for residents of Jesuit Hall, the university’s residence for Jesuits.