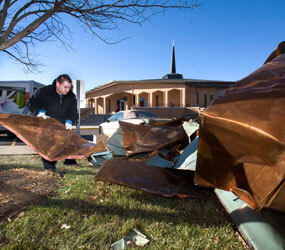 ST. LOUIS – After damaging tornadoes and severe weather hit the St. Louis area hard on New Year’s Eve, the reaction of many affected by the storm was more gratitude than grief and more reaching out to help others than asking for help themselves.

“There are people who are in much worse condition than we are,” said Monsignor Michael Dieckmann, pastor of St. Paul Parish in Fenton, who barely made it to the basement with his associate pastor, Father Jim Holbrook, before a tornado hit the rectory. “Father Holbrook and I are fine. There are people in Sunset Hills (and other areas) who lost everything.”

Father Joseph Weber, pastor of St. Justin Martyr Parish in Sunset Hills, where numerous homes were destroyed, said, “I’m much more concerned about St. Paul’s than us.” Members of his parish have been actively helping neighbors hurt by the storm.

The two South St. Louis County parishes were among the most hard hit by the Dec. 31 afternoon tornadoes, but there was no loss of life and no significant injuries. “Thanks be to God no one was hurt,” Father Weber said. While damage to homes was more severe in Sunset Hills, the Fenton parish property suffered a direct hit.

According to the National Weather Service, the tornado that struck St. Paul’s was an EF2, which has a wind speed of 113-158 mph.

“I’d been tracking the storm on my ham radio and weather alert radio and my scanner, and I stepped outside to see what happened,” Monsignor Dieckmann said. “The wind picked up, and I heard the freight train noise. I yelled at Father Holbrook that we had to get downstairs. The whole thing was over in 10 seconds.”

St. Paul Church has roof and water damage; the school had about 60 windows blown out in seven classrooms. Both were judged structurally sound by a structural engineer hired by the archdiocese, Monsignor Dieckmann said, and weekend Masses were celebrated in the church.

Repair estimates are being obtained for the damages to the parish church and school, said Robert Ryan, director of the archdiocesan Office of Risk Management, which administers property and casualty insurance and risk management services for the archdiocese.

But Ryan said the rectory and parish office had sustained major structural damage, and a structural engineer is in the process of detailing the extent of the damage.

“The actual cost of repair will not be determined until estimates are received, but it well could be in the area of $1 million,” he said. “The archdiocese has sufficient insurance coverage to pay for the loss.”

At St. Justin Martyr, parishioners have been busy since New Year’s Eve cleaning up the area hit by an EF3 tornado, which has wind speeds of 158-207 mph according to the National Weather Service.

According to the parish, at least 17 parish families were affected by the tornado.

“Our people and our neighborhood and our children are so generous with their time, talent and treasure,” said Father Weber. “The kids are so concerned about doing right and helping others.” He cited numerous examples of people pulling together to help one another in recent days, including a weekend clean-up effort by members of St. Justin Martyr School’s student council, the parish youth group and others.

A number of St. Justin parishioners had their homes damaged, including Jim and Angie Suellentrop, who moved to a hotel for several days after sustaining roof and window damage.

“What is really remarkable – good things happen in tough situations,” Angie Suellentrop said. “We have been so impressed with our police department who secured the neighborhood. And yesterday, there must have been 100 volunteers marching through the streets. Wherever someone needed help, there were people there.”

Catholic Charities in St. Louis has applied for an initial $10,000 in emergency funding for tornado victims, according to Brian O’Malley, president.

Catholic Charities USA has partnered with the Federal Emergency Management Agency to provide emergency and disaster response, O’Malley said. That means that local agencies that are members of Catholic Charities can apply for funding in response to local disasters.

The funding, he said, would be focused on helping people to replace food and provide temporary shelter and mental health counseling. He added that the agency can provide help in other ways, such as paying insurance deductibles.

O’Malley said Catholic Charities has a close relationship with other social service agencies, such as the Red Cross and Salvation Army, in providing assistance during a natural disaster.

“They’re the first responders in situations like this,” he said. “It would be our role typically to do the mental health counseling, and long-term housing, things like that. There’s a system in place, and it works pretty well. The agencies work closely together whenever there’s a disaster.

“I think it’s an opportunity for the Catholic community to be reminded of how precious life is,” he added. “And that with that comes an opportunity to reach out and care for your neighbors.”