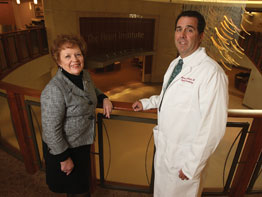 This is not your grandfather’s hospital.

From private patient rooms furnished with sleeper sofas, to a refurbished chapel, to the kinetic sculpture in the main lobby, St. Joseph Medical Center is celebrating a monumental opening.

A new main entrance, lobby and Heart Institute are to be unveiled Dec. 8 and open for business a day later, making for a watershed week for the Towson hospital. A $125 million transformation has already included a new Cancer Institute and parking garage.

“When you talk about our history,” said Patricia A. Bosse, vice president for Mission & Institutional Advancement, “after the building of the first hospital on Caroline Street in 1864 and the move here in 1965, this is the next most significant thing we’ve done.”

Dr. Stephen Pollock is not only the director of the Heart Institute – he’s also one of his customers.

“I’ve had angioplasty twice, so I know from a patient’s perspective,” Dr. Pollock said. “A patient doesn’t recognize the walls between departments, they just want to get their heart fixed. Every step of your treatment starts here.”

The Heart Institute’s 8,000 annual procedures will now be done on its new main floor. One level up is a fitness center, to speed rehabilitation. The third level includes 30 private rooms, where a family member or friend can also rest.

“This hospital is about faith and healing,” Dr. Pollock said. “It’s not just about a cross and a chapel, but a place where families can sit and offer support.”

San Damiano Crosses abound nonetheless, as reproductions of the icon that inspired Saint Francis of Assisi in the early 13th Century are ever-present at an institution that was founded by the Sisters of Saint Francis of Philadelphia.

The most prominent is found in the chapel, steps from the new main lobby, which is adorned with “Grace,” a 700-cubic square foot sculpture by Michio Ihara dedicated to the memory of Erinn Kathleen McCarthy, who died of cancer at age 14.

It was made possible by a gift from friends and family, including her parents, William J. McCarthy, a member of the board of directors at St. Joseph, and Maria, a pharmacist there for two decades.

The sculpture adds to the entry to a modern space.

“This hospital is a great place, but it had been an old facility,” Dr. Pollock said. “I’m a sports fan, and I liken it to (Baltimore’s) Memorial Stadium. It was a great place in 1960, but it was terrible by the time the Ravens moved there. This the same concept.