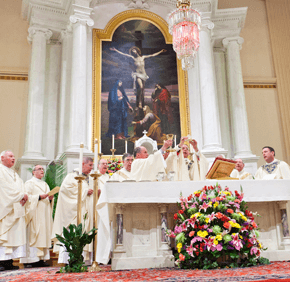 By Maria Wiering
mwiering@CatholicReview.org
Twitter: @ReviewWiering
FREDERICK – Archbishop William E. Lori honored St. John the Evangelist’s legacy and promise for a vibrant future April 28 during a Mass marking the 250th anniversary of the parish’s establishment. He also surprised the congregation by appointing a new pastor: Father J. Kevin Farmer, who has served as the parish’s administrator since June 2012.
The announcement was met with approving applause, whoops and whistles.
For Father Farmer, the appointment means “I get to stay,” he told the Catholic Review. “I get to know this is where I’m going to be for awhile, and that’s really exciting.”
To view a slideshow, navigate the arrows below.
Interested in purchasing any of these pictures? Click here.
Father Farmer will be the parish’s 40th pastor, succeeding a line of prominent Jesuits and diocesan priests, including Sulpician Father John DuBois, who founded Mount St. Mary’s College (now University and Seminary) in Emmitsburg and became the third bishop of New York, and Jesuit Father John McElroy, who in Frederick, established St. John’s Literary Institution (now St. John’s Catholic Preparatory in Buckeystown), as well as Boston College in Boston.
Mount St. Mary and Boston College sent letters of congratulation to the parish, which Father Farmer read at the end of Mass.
The parish dates its establishment to 1763, when a Jesuit priest began serving Catholics living in Frederick. Because penal laws forbade public worship, they attended Mass in a private house chapel dedicated to St. Stanislaus Koska.
The parish became St. John the Evangelist with the erection of its first permanent church in 1800, under the direction of Father DuBois. The second and current church was consecrated in 1837, under Father McElroy.
The parish began commemorating its milestones last year with a Mass celebrating the 175th anniversary of its church’s consecration. This year’s celebration included a blessing of historic Catholic sites in the neighborhood: the graves of Jesuit and diocesan priests who served the parish, including that of Father McElroy, at the parish cemetery; Visitation Academy; and the former sites of a Jesuit novitiate and St. John’s Literary Institution.
Jesuits staffed the parish from its founding until 1901, with the exception of 16 years under Father DuBois. Father Farmer called the Jesuits’ role “a significant contribution” and one he wanted to emphasize during the sestercentennial jubilee. Jesuit Father James Casciotti, socius for the Maryland Province of Jesuits, assisted Archbishop Lori with the historic site blessings and concelebrated the Mass.
Nine other priests also concelebrated the Mass, including former pastors and associate pastors of St. John, and pastors of neighboring parishes.
The jubilee also recognized the contributions of the Daughters of Charity, Visitation Sisters and the School Sisters of Notre Dame, who have all served the parish at different points in its history.
The yearlong celebration has been “amazing,” said Ribka Kintaro, 26, a parishioner and senior at Notre Dame of Maryland University who read the Mass’ Scripture readings.
“I never imagined I’d be part of such a historical parish,” she said.
She emigrated from Palau, an island country in the western Pacific Ocean where her parish was less than 100 years old, she said.
St. John is the oldest parish in the Archdiocese of Baltimore, and predates the establishment of the archdiocese by 26 years.
During his homily, Archbishop Lori called St. John a “tremendous parish,” noting its growth from a house church to 4,200 current families.
Focusing on the theme of “newness” that ran through that day’s Scripture readings, he emphasized that Jesus is the source of “newness of life,” and the sacraments are means of experiencing his love.
“That’s the love that makes us new. That’s the love that will keep this old parish young for years and years to come,” he said.
Father Farmer agreed with Archbishop Lori’s assessment of his parish as “vibrant,” citing a large Latino community and members from Africa, Haiti and the Pacific Rim.
“It’s great to see the diversity in the parish, but also see young and old together as our future, so we have hope,” he said. “This isn’t a dying parish. It’s a parish that’s full of life.”
Also see:
New campus blessing, curious students draw Archbishop Lori to Frederick
Buckeystown parish to break ground on new church
Copyright (c) April 29, 2013 CatholicReview.org
PrevNext