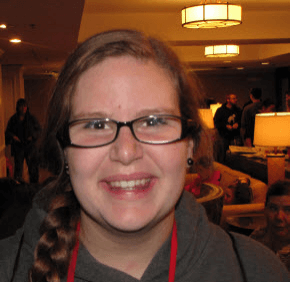 Cleo is one of many high school age young people who participated in the National Catholic Youth Conference Nov. 21-24 in Indianapolis. Below are three guest blogs she provided to the Catholic Review chronicling her experiences at the event. To read Holy Trinity, Glen Burnie, parishioner Cara Hardy’s blogs from the event, click here.

On Nov. 21 we departed from St. Stephen around 8 p.m. Everyone on the bus was so excited, it was impossible to even think about sleeping until around midnight.

The bus ride went smoothly and faster than originally planned because we actually arrived at a Ryan’s Buffet in Indianapolis the next morning about an hour early for breakfast. The food was so good, it was worth the wait.

A short bus ride and some detailed instructions later, we arrived at hotels to drop off our bags. We were itching to freshen up. Both hotels and other local establishments opened their bathroom doors to accommodate us. We were using any sink we could to brush our teeth and comb our hair. Some of the girls even used their phones for help in applying make-up. As ridiculously tired as we all probably looked, everyone was still laughing and smiling.

Then, we were back on the bus and raring to go into the convention center. The smiles from Wednesday night had yet to fade and from the looks on everyone’s faces inside the thematic park (with lots of exhibits, shops and activities), I was pretty sure they never would. Their excitement was unparalleled to anything I have ever experienced.

There were people from all over the United States, trading hats. There were singing priests, a ventriloquist sister and lots of merchandise everywhere. It was literally impossible to not be hyped after the park closed at 4 p.m. We could only wait in extreme anticipation for our first general session.

Jenna Brooks, Celina Rescott, Judy Rescott, Maggie Flurschutz and Mallory Colella from the Diocese of Rochester, N.Y., dance and sing along Nov. 21 to “By the Love of God,” the 2013 theme song for the National Catholic Youth Conference at Lucas Oil Stad ium in Indianapolis. More than 23,000 youths from across the country took part in the three-day conference. (CNS photo/Sam Oldenburg, Catholic Courier)

As we entered the stadium, there were 20,000+ young people there to greet us with their cheers and love of God. The assembly kicked off with amazing performances by Grupo Huellas and Righteous B that had everyone on their feet.

This year’s emcee was Jesse Manibusan and guest performers Israel Houghton and Matt Maher set a prayerful and joyful mood for the evening. Being in the same stadium with all these people sharing the same faith as you, all singing the same prayer is just awe-inspiring.

I am really excited to see how the next few days will turn out considering how amazing the first day was.

As I walked down the hotel steps and turned the corner, I was greeted by a bunch of ArchBalt teens smiling and cracking jokes over breakfast. I was starting to get a little worried last night because everyone was so tired, but a good night’s sleep can do an archdiocese well!

It was a good thing, too, because DJ Bill Lange, Noelle Garcia and Popple had everyone on their feet and dancing in the morning assembly. Speaker Bob Perron spoke of how God has adopted all of us as his children. He and emcee Jesse Manibusan set a great mod for the NCYC participants as we began to walk back to the convention center for breakout sessions.

The first session I attended was “Gleeful or Lethal?” and we discussed how teens should not live their lives like the characters on the show “Glee” live. The session began with speaker Father Jonathan Meyer dancing the “Wobble.”  Needless to say, with a start like that, the rest of the session was awesome.

From there, my group of girlfriends went to “Search for Superman” with ValLimar Jansen and Amanda Vernon. It was an all-female session that made me feel empowered and proud to be a woman of the church.

I wasn’t able to attend the third session because I had an opportunity to participate in one of the many NCYC service opportunities, Locks of Love. On my way to my hair appointment, I got to meet Matt Maher and Jesse Manibusan. I’ll be honest, I cried because I was so excited.

It was finally time to donate my hair. My entire youth group was cheering me on.  After all was said and done, I ended up putting 12 inches of my hair in a plastic bag and I felt amazing. Being given the chance to serve the community in this way was an experience I won’t soon forget. (My head feels about 10 pounds lighter now.)

After dinner at the RAM with all the Harford Area Youth (HAY), we walked back into the Lucas Oil stadium and listed to Paul Kim and the Jose Rivera band while waiting for the general session to begin. Jackie Francois was the keynote speaker and she had the perfect mix of the hilarious and the reverent.

The evening closed with a Taize prayer service which the entire archdiocesan delegation participated in. We were all able to sit on the main stage during the service. Being able to look out across the stadium and see all the teens on fire for the Lord was absolutely beautiful. It really was the perfect end to a more than perfect day.

The last day of NCYC was upon us. The excitement level has yet to fade, but there was a hint of sadness in the air because we knew we were going to have to leave.  But, until then, we were just going to focus on the radical day God had in store for us.

My first workshop was with Mark Hart of LifeTeen, one of my personal favorite people in Catholic youth ministry. His talk made me feel amped up about being Catholic and motivated my group of friends to run to confession. The line was down the length of the hallway, but it was worth the wait because we all knew we would soon be clean in the eyes of the Lord.

After that I got a chance to meet Paul J. Kim who was really funny and spectacular.  He goofily spoke to us in a British accent which just increased his level of greatness.

Speaking of greatness, we went to the NCYC Got Talent competition, which featured ArchBalt’s Patrick Evan Collins, an amazing musician from my home parish. He made it to the top 10 of the competition and performed before a very large hall of teens. He did not win, but his performance was outstanding and he was awarded a ton of CDs (that I had to carry around!) as well as a single on iTunes. As a member of his church, I am nothing but very proud of him.

Then, at last, it was time for the closing Mass. There were so many priests and bishops that four songs were needed just for the procession. Of course, with so many priests there, Communion with 21,000 was faster than you might think. At the end of the Mass, we were all filled with the Holy Spirit and we sang the theme song one last time as a giant group. I met people who came to NCYC broken and empty and who left full with the spirit of Jesus in theme. It was a bittersweet ending but I would not trade these days at NCYC for the world.

Maggie McAuliffe holds hands with other pilgrims from St. John the Evangelist Church in Spencerport, N.Y., while saying the Our Father during the closing Mass of the National Catholic Youth Conference Nov. 23 at Lucas Oil Stadium in Indianapolis. More th an 23,000 youths from across the country took part in the conference. (CNS photo/Sam Oldenburg, Catholic Courier)