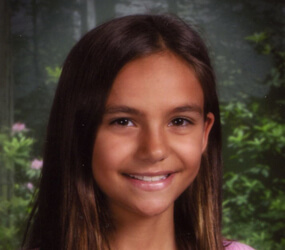 Earlier this year, Faith Ensor received a letter from the Carson Scholars Fund.

Months of anticipation had led to this moment for the 11-year-old parishioner of St. Ignatius, Hickory. Nominated by her school, North Bend Elementary in Jarrettsville, where she is a fifth-grader, Faith just wanted to believe good news was inside.

Her mother, Melissa, gave her one bit of advice: “Whatever it is, it will be God’s will.”

Faith opened the letter to see the words, “Congratulations, you are a 2009 Carson Scholar.”

Faith, universally described as a humble girl by teachers and family members, relished the honor.

“I kind of went to my room and screamed, and then I ran back downstairs because I was so excited,” Faith said.

Faith received the Carson scholarship April 26 at Martin’s West in Woodlawn along with other honorees. The awards were founded by Dr. Benjamin Carson, the renowned pediatric neurosurgeon at The Johns Hopkins Hospital in Baltimore.

“Throughout the evening, I was in tears,” Melissa Ensor said. “They were saying everything my husband and I tell our daughter, which is when you are blessed by God you have a responsibility to be a blessing for others.”

The fund gives $1,000 college scholarships for academically strong students in grades four through 11.

Winners are given a large medal and a trophy to give their school. The student must have at least a 3.75 grade point average to be nominated.

Faith has never received a grade below an “A” on her report card.

The Carson Scholars Fund puts as much emphasis on community activity as classroom achievement.

North Bend special education teacher Susan Melefsky, who has been a catechist at St. Ignatius for more than 20 years, said Faith is a reflection of her father, Mitch, and mother, Melissa.

“They’re a wonderful family with the nicest kids you’ll ever want to meet,” Melefsky said. “They show their Catholicism in a lot of ways.”

At St. Ignatius, Faith helps her mother with the Children’s Liturgy of the Word each Sunday by reading to younger students. She donates clothing to Tabitha’s House, an organization that helps families in need, and the St. Vincent de Paul Society.

Faith helps prepare food for Beans and Bread and even knits baby blankets and booties for the Birthright Pregnancy Aid Center of Harford County. She hopes to do the same thing for babies born at St. Joseph Medical Center, Towson.

“My parents always told me that you can be smart and you can be beautiful, but if you’re not nice enough on the inside, it doesn’t count,” Faith said. “When I was little, they would show me the caps and blankets I wore and I thought it would be nice if little babies could have what I had.”

Faith helped start a recycling club at North Bend that collects aluminum cans. She took first place in a school-wide poetry festival and has won local and state creativity contests for dance, art and photography.

North Bend vice principal Susan Gebhardt said: “Faith is just a wonderful person and we are blessed to have her here. She’s a model for our future students.”

Melissa Ensor, a former teacher, said her daughter lives out her name each day.