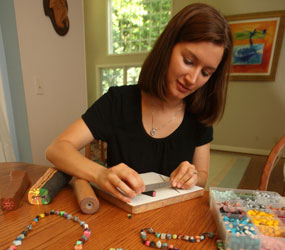 For Sarah Harkins, a teenage interest in making clay rosaries began with some simple instructions. It blossomed into a calling.

Now 27 and a parishioner at St. Ignatius in Hickory, Harkins has gone global with her rosary making at www.clayrosaries.com, and her work is in demand. She has produced hundreds over the years.

“I just have fun with it,” Harkins said in a park across from St. Margaret parish in Bel Air. “I love doing it for God and I think it’s something he wants me to do.”

Because of the expense it takes to purchase materials, the Web site is less of a business and more of an extension of her spirituality.

Rosaries weren’t always a passion for the daughter of a Minnesota deacon. She said her faith was renewed as a high school freshman during a retreat.

“Very early on, I always loved the church,” Harkins said. “From there, I had a fascination toward the rosary, but I didn’t have a love for it yet. I think (the Blessed Virgin Mary) kind of led me toward her more. I feel like the more rosaries I make for her, the more she leads me to her son.”

Harkins has many different rosary designs available on her Web site, including one for the Eucharist that has 10 different beads.

“It’s more meditative,’ she said. “It’s meant especially for eucharistic adoration. I’m trying to get more specialized ones like that for people.”

The mother of 2-year-old Liam and 5-month-old Analee often works around her children’s sleep schedule.

Harkins works from the Bel Air home she shares with her husband, Eric.

The couple met and fell in love while students at the Franciscan University of Steubenville in Ohio. They lived briefly in Colorado and California, where Sarah taught at a small Catholic school. They came to Maryland a year ago because Eric’s family was here.

No matter where she is, Harkins has settled into a groove making the rosaries.

“It probably will take me a day for an easy one and a more difficult one three days,” Harkins said. “I make the bead, then I have to roll it and slice it and that takes another few days,” she said. “It takes maybe a week for one design and from that design, I get a few hundred beads.”

Rather than dwelling on the hard work, Harkins thinks about who a rosary will benefit.

“I think for young people, the rosary can be kind of dry,” Harkins said. “So, they look at the beads and the symbols on the beads that have biblical and Catholic meanings. They get more meaning from the rosary from looking at the beads.”

Harkins prays for the person who will receive the rosary. She recently joined a mother’s club at St. Ignatius and said it has deepened her faith.

“I love St. Ignatius,” she said. “There are so many moms groups out there that aren’t Catholic. It’s a real blessing to find one that is.”