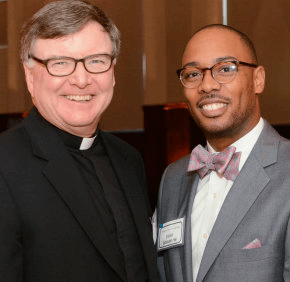 By Isaiah Matthew Wooden
On Nov. 1, more than 200 friends and supporters of St. Ignatius Loyola Academy gathered in its sparkling, state-of-the-art educational facilities in Federal Hill to celebrate the school’s 20 years of transforming the lives of Baltimore families. When, in the fall of 1993, I gathered with 19 other boys from across Baltimore to commence middle school at the newly founded Academy, the school consisted of just three classrooms on a single floor at its old Calvert Street location. How remarkable, then, to walk through the Academy’s new building on Friday and to chart the school’s tremendous growth and many successes over the last two decades.
Twenty years ago, I could not have possibly imagined how profoundly life-altering the decision to attend the Academy would prove. My days at the Academy were marked by intellectual curiosity and academic engagement, camaraderie and sportsmanship, and, importantly, a beautiful sense of family and community. Teachers, tutors, mentors, and benefactors all exampled for me what it might mean to be a man for others and, indeed, a global citizen in a world so desperate for more compassionate actors and empathetic change-agents. Significantly, the education that I received at the Academy put me on a path of rigorous academic challenge that continues to prove sustaining.
I graduated from the Academy in 1996 and went on to attend Georgetown Preparatory School on a full scholarship, where, thanks to the strong academic foundation I received at the Academy, I thrived. I would later attend another fine Jesuit institution for college, Georgetown University in Washington, DC. These days, I am in the throes of completing a dissertation in Theater and Performance Studies at Stanford University, from where I expect to graduate in 2014 with a Ph.D. Undoubtedly, it was those early days discussing John Knowles’ A Separate Peace and Lorraine Hansberry’s A Raisin in the Sun at the Academy that first excited my desire to pursue a “life of the mind.”
Of course, my road is only one of the many paths that the 366 graduates of the Academy have taken to successful lives. My fellow alumni are engineers, manage restaurants, work as journalists and in business, attend law school and are teachers. They have also embraced the men for others ethic by serving in the armed forces, as police officers, and as emergency medical technicians. To be sure, we each appreciate and have attempted to make the most of the opportunities the Academy provided us.
For those of us who convened on Friday, the 20th anniversary celebration affirmed that the future is exceedingly bright for St. Ignatius Loyola Academy and the many families and communities it serves. Powerfully, the school has remained steadfast in its commitments to providing a rigorous education that emphasizes the intellectual, physical and spiritual growth of young men from across Baltimore City over the last twenty years. As someone deeply impacted by the school’s investments in cura personalis, I look forward to witnessing and celebrating the Academy’s continued growth over the next twenty years.
Isaiah Matthew Wooden is a writer, performance-maker, and doctoral candidate in Theater and Performance Studies at Stanford University. A 1996 graduate of St. Ignatius Loyola Academy, he was born and raised in the great city of Baltimore, MD.
For more articles on Catholic education, click here.
Also see:
Angel of Consolation Memorial Garden offers hope to families who have endured loss
PrevNext