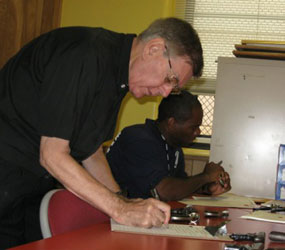 One man was ready when Monsignor Damien G. Nalepa opened the doors of St. Gregory the Great Parish at 10 a.m. Sept. 12 for Gun Turn-In Day. He had 12 guns to turn over to the priest, who has spent 30 years fighting violence in the West Baltimore neighborhood around the church.

For the dozen guns, which included four automatic weapons, the man walked away with $800 in cash. And the church’s gun turn-in program was up and running again.

Three people were violently murdered in the neighborhood in the last three weeks, one at the end of the block from the church. This weapon turn-in day, already scheduled, became even more urgent.

“We have to do something,” Monsignor Nalepa said. “We realize this isn’t the end-all answer to violence,” but it is a step in stemming the tide, said the St. Gregory pastor.

He acknowledged that some of the guns turned in were old, and might not have much street value. But, the guns may have been used in plenty of crimes over time. According to police officers who helped process the guns, the weapons were quite lethal.

“Some of the smallest ones can be concealed in a pocket or hand,” Monsignor Nalepa said.

Baltimore Police Officer Lawrence LaPrade, who logged information such as manufacturer and serial number on each gun, agreed. He said the smaller guns are often hidden on street corners until a person needs them. He agreed with the pastor that even if the guns aren’t loaded, they can be used to threaten.

About an hour after the event began, more weapons came in – a rifle and a single-barrel shotgun, along with a bag of ammunition. The turn-in program is operated on an anonymous, no-questions-asked basis, so the parish does not know the stories behind the guns, unless the person turning in the weapon chooses to talk about it.

Twenty minutes later, a woman dropped off a rifle and a revolver. She said the guns belonged to her husband, who died a couple of years earlier. She was scared to handle the guns, and was afraid to have them in her home.

LaPrade told The Catholic Review the guns will be taken to the Evidence Control Unit to be checked by serial number, and possibly for ballistic tests, to see if they have been used in a crime. Any gun turned in that has been used in a crime will be kept for evidence; the rest will be melted down. Monsignor Nalepa hopes the metal from the guns turned in can be formed into a “peace sculpture,” perhaps of St. Francis of Assisi.

Cecil Crowell, a parishioner and former men’s club president who assisted with the turn-in, said he knows this effort is needed.

Crowell said the program and other parish efforts to work against violence, such as its involvement in the Safe Streets initiative, “lets us know that as God’s people we have to take the message of God’s peace and love to the community.”

The message the parish wants to send to those who commit violence, he said, is: “We don’t tolerate it. This is not something we should be doing to one another.”

Crowell said the message of peace “has to start with us. If we’re not being instruments of peace, it’s hard to spread our message.”

Throughout the day, more guns arrived – an antique musket, a rifle with a scope, then more.

He had received a call earlier in the week from a woman who could not make it on turn-in day, so he made plans to to pick up six guns from her a few days later.

He said criminals do not usually turn in weapons, but getting guns out of homes prevents them from finding their way into trouble.

Officer LaPrade said, “If there is a break-in (at a home with guns), then those guns are on the street,” he said.

By the end of the day, 21 guns had been turned in, and $1,250 had been disbursed. Nine more weapons were turned in Sept. 14. The pastor said that though that might seem a small amount in terms of the number of guns in the city, this could have a serious impact.

The police officers involved in receiving the guns on behalf of the city declared the day a big success.

“Any time we can get even one gun off the street, that’s a success,” LaPrade said.