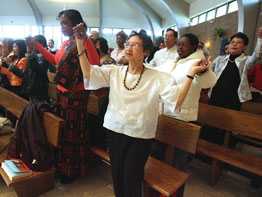 Joyful music filled St. Gabriel, Woodlawn, Dec. 2 as parishioners in the packed church raised their voices during a Mass celebrating the 10th anniversary of the Baltimore County church.

St. Gabriel, which was formed in 1997 from the former St. Lawrence and Shrine of Our Lady of Perpetual Help churches, is home to longtime parishioners as well as Filipinos, a fairly large Hispanic population, people from Nigeria and Cameroon, and parishioners from Vietnam, Japan and Korea.

The John Paul Regional Catholic School is located on the parish campus.

“We celebrate a diversity day in the spring, and the reading at Mass that day is done in 11 languages,” said Monsignor Thomas L. Phillips, pastor, adding that the parish has a weekly Spanish Mass and a monthly bilingual Mass.

During his homily, which he delivered partially in Spanish, Bishop Rozanski spoke about the difference between passive waiting – in lines, in traffic – and the active waiting of Advent. “It is a waiting in which we participate in the work of God, in which we realize our part in salvation,” he said.

He asked for a show of hands to see how many had been in the parish 10 years ago.
“You remember the struggles and you know it wasn’t passive waiting for all this to come together,” he said. “It involved a lot of emotions, a lot of work … active participation of the work of God in our world.”

He told the parishioners, “We are the people who bring together today a diversity of experiences. We are a people who realize we are each made in the image of God.”

After the Mass, Archbishop O’Brien spoke briefly and then stayed to greet parishioners as they headed to a potluck dinner in the school hall.

“Ten years is not a very long time but it is a significant period when a parish begins from scratch and accomplishes as much as this parish has,” he said. “It’s rather remarkable … Not only is this parish concerned with its own affairs, in liturgy and in education …but it’s concerned with the needs of the world around us.”

When the original parishes closed, the parishioners together chose the name St. Gabriel and picked the first Sunday of Advent as their anniversary.

Said Tom Wolpert, a corporator for the church, “I think we’re making progress … We are diversified, as you can see, and it will get more diversified. Father Tom does a good job – sometimes we don’t agree but he does a heck of a job. It was a struggle; the biggest thing is getting people to accept the change. I can’t believe it’s been 10 years.”

Cynthia Shonaiya, who is from Nigeria, tried several parishes when she moved to Catonsville nine years ago until she heard about St. Gabriel.

“We were attracted by the diversity, the warmth and the welcome we received and we’ve been here ever since,” she said.

Longtime parishioner Mary Pat Wentker said they’ve seen “many, many changes, but you adjust and see growth and we’re still learning and continuing to work together.”