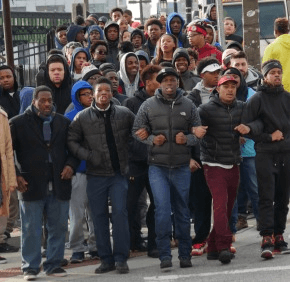 While they may not have walked the full 54 miles from Selma to Montgomery, Ala., students at St. Frances Academy still got a firsthand taste of how nonviolent protests promoted the passage of equal rights in the United States.

The entire student body at the historic East Baltimore Catholic high school marched just over a mile from the school’s chapel to the Charles Theater Feb. 4, where they viewed the critically-acclaimed film “Selma.” The film chronicles the 1965 voting rights marches from the city of Selma to the Alabaman state capital of Montgomery, which were a turning point in the civil rights movement and resulted in the passage of the Voting Rights Act of 1965.

During the mile-long march, students chanted “We Shall Overcome” as well as words inspired by events in Ferguson, Missouri: “Black Lives Matter” and “Hands Up, Don’t Shoot.” Classes and mentor groups created signs in English and Hebrew.

St. Frances student Ge’kiara Spain said the movie gives teens information about what happened before they were born.

“I feel as though today and the time we live in now – a lot of people take that for granted,” she said. “People back then didn’t really have the things we have now, and they fought for us to get where we are.”

At the end of the march, students linked arms to re-enact the successful March 21, 1965 crossing of 3,000-plus marchers over the Edmund Pettus Bridge in Selma. Earlier that month, civil rights advocates were attacked on the bridge with nightsticks and tear gas.

The school hoped to use the movie to teach students about the nonviolent tactics of leaders like Dr. Martin Luther King Jr., and link the lessons of 1965 to the turmoil of today.

“We can look at the things that we are worrying about, and the things that affect our community, and what things we can do now, as citizens, to get rights for all people,” St. Frances assistant principal of student affairs Torena Brown said. “It is important for students to see what nonviolent protest is, unlike what they may have viewed on television. During the march to Montgomery from Selma, they were attacked, and they refused to fight back. And I think that is important to see that you can get things accomplished through the act of nonviolence.”

St. Frances Academy is the oldest Catholic school for African-American students in the country. It opened in 1828.

Pope: Families need fathers who guide and love them through thick and thin

More than ever, Monsignor Miller a sign of peace in West Baltimore