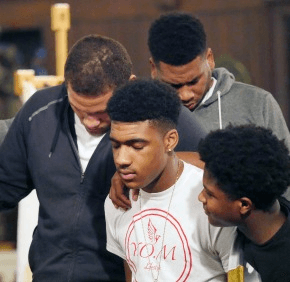 By Erik Zygmont ezygmont@CatholicReview.org Twitter @ReviewErik
In the wake of the death of Freddie Gray Jr., everyone is thinking about Baltimore’s future, including the young men who attend classes at St. Frances Academy.
Myron Turner, a junior who will captain the football team next year, expressed some optimism.
“Keep praying and keep pushing, and there’ll be better days,” he said.
Turner, who lives in the Park Heights neighborhood, added that he felt a response from city residents “was well needed” after Gray’s death, but he had misgivings about the looting and rioting.
“I felt people took advantage of the situation,” he said. “What was it all for? All the looting and breaking into stores was destroying our own stuff, when we already don’t have anything.”
Tevin Towns, a freshman, agreed with Turner’s assessment. Both Turner and Towns were interviewed April 28, the day immediately following the riots.
“There’s always a better way to do it,” Towns said.

The St. Frances students said that they lean on their religion and spirituality in hard times.
“We can come together in peace and take everything in God’s plan and put it in his hands,” said Towns, who participated in a revival at St. Bernardine in West Baltimore April 27-29.
Jahid Davis, a sophomore, and Darrien Thomas, a junior, also appreciate their school’s emphasis on religion, particularly the morning and afternoon chapel sessions.
“You’re down there in the morning for praise and worship,” Davis said. “It enlightens your day.”
“You need it to start your day,” Thomas agreed.
Both expressed frustration regarding the sometimes tense relationship between youth and city police. Thomas noted that the rapport is much better with the police officers he knows.
To that end, according to Deacon B. Curtis Turner, principal of St. Frances Academy, the school is in the process of establishing a Police Explorers program, in which students partner with the Baltimore City Police Department to examine law enforcement as a possible future career.
“Our thought was that dialogue is always good,” Deacon Turner said.
In the meantime, as city tensions have relaxed to a degree, the students are looking to the coming summer.
Thomas has enrolled in the city’s YouthWorks jobs program and hopes to work on a construction site. He plans to attend college after his senior year and possibly work as a sports journalist.
Davis will be participating in St. Frances’ summer enrichment program. He is fascinated with learning the Hebrew language.
“This is my second year of it,” he said. “In other schools, the only other language you can learn is Spanish. At first I was like, ‘What is Hebrew?’ ”

Catholics call for justice at One Baltimore faith rally

From the ashes comes ‘a shining star’