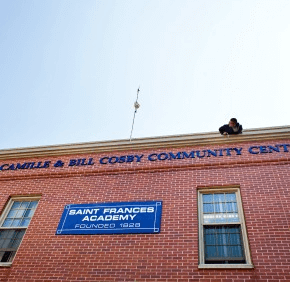 Following the revelation by the Associated Press that Bill Cosby admitted to obtaining Quaaludes with the intent of giving them to young women with whom he wanted to have sex, the president of St. Frances Academy affirmed her support for the 77-year-old comedian’s family, particularly his wife, Camille.

“I am very supportive of Camille and her family and will keep her in prayer,” said Oblate Sister of Providence John Francis Schilling, president of the East Baltimore high school operated by her Baltimore-based religious community.

Sister John Francis responded via email to questions from the Catholic Review.

Sister John Francis stated that “our relationship is with Dr. Camille Cosby since she is a graduate of one of our Oblate schools in Washington, D.C.”

She said that $2.2 million in donations had been gifted to the school in both Bill and Camille Cosby’s names. In 2012, the Catholic Review reported that the funds, which St. Frances Academy had received in 2005 and earlier, had been used to establish 16 full-tuition scholarships.

The Catholic Review also quoted Camille Cosby as referring to the Oblate Sisters of Providence as “paradigms for all humanity,” and thanking them for their impact on her and other students’ lives.

Sister John Francis said she has received no requests from parents or alumni of St. Frances to change the name of the community center.

According to the AP, Cosby admitted in 2005, while testifying under oath in a lawsuit filed by a former Temple University employee, that he had given the plaintiff three half pills of Benadryl.The lawsuit was settled in 2006. No criminal charges were filed, according to the AP, which also reported that most of the accusations of sexual misconduct against Cosby from more than two dozen women fall outside the statute of limitations.