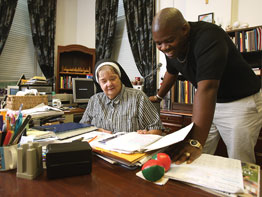 The longtime development director stopped near his school’s gymnasium-community center and glanced across the street at the looming Maryland State Penitentiary, which literally casts a shadow on the St. Frances Academy campus.

While others might write off this blighted part of Baltimore, Mr. Nealis and other leaders of St. Frances Academy see a bright future closely connected with their high school.

They dream of developing the area – bounded by Greenmount Avenue on the east, the Fallsway on the west, Chase Street on the south and Biddle Street on the north – into a vibrant, expanded school campus serving inner-city teens.

Preliminary plans call for a three-story academic building featuring a new cafeteria, theater, classrooms and space for the school’s well-respected counseling program. The existing academic building, erected in 1870 and previously serving as a convent and orphanage, would be renovated to become the freshman campus. Much-needed athletic fields would also be added.

There are many hurdles in making the ambitious campus plans a reality. Many millions of dollars will need to be raised and property will have to be acquired, yet optimism abounds.

“It will make a real difference in this area,” said Sister John Francis Schilling, O.S.P., president of St. Frances Academy. “It can really help the area to get rid of all the boarded-up buildings and vacant lots and have something positive.”

“The big thing is getting the property, and who knows how long that’s going to take,” she said.

The president emphasized that the school has no intention of displacing the people who live in the area. While most of the property is vacant, a few people own homes or rent.

“We’re hoping they’ll relocate in the neighborhood, and we’ll have an obligation to help them do that,” she said.

St. Frances Academy already owns a few lots across the street from its main building, the site where the new academic structure would be built. But most of the property sought by the school is owned by the Federal Housing Authority and Baltimore City.

The school hopes to negotiate with city officials to acquire land for its project at reduced costs. Sister John Francis said she expects the city to be supportive.

“We don’t want a developer to come in and sweep all this up and we’re stuck and we don’t have any room to grow,” she said.

In January, St. Frances Academy purchased seven properties from the city on Brentwood Avenue for $7,000 total. Five are vacant lots and two hold row houses. The school isn’t yet sure how it will use the houses, but some possibilities include storage, expanded office space or apartments for teachers.

“The mayor knows our plan in a general way,” said Mr. Nealis. “Ultimately, everyone said this is great. There’s a point when we’re going to have to start doing some major fundraising. Internally, we haven’t made that step yet.”

As a school that operates payroll to payroll, finances have always been a challenge at St. Frances Academy. Students come to the school from some of the most economically hard-hit sections of the city. Most can’t afford full tuition, so the school uses a sliding scale based on income.

Last year, more than $1 million had to be raised above what was collected in tuition to pay for operating costs. Mr. Nealis estimated that at least $1.75 million will be needed this year.

“If we’re going to get a little bit of breathing room in our operating budget, we need to increase our endowment to $20 million,” said Mr. Nealis, noting that the endowment now stands at $3.5 million and enrollment at about 300.

Before the larger campus improvements are made, the school would like to build a temporary artificial turf practice field near its community center for the football and lacrosse teams, which will cost approximately $100,000.

Asked how much the total campus expansion would cost, Mr. Nealis said the plans are very preliminary and the school has not broken it down. It could range in the $30-50 million area, he said.

“In order to get the money and the support we need, we’re going to have to rely on divine providence,” said Sister John Francis, a member of the Oblate Sisters of Providence – a religious order founded in Baltimore by Mother Lange as the first women’s order for African-American women.

“I’m not worried about it,” she said. “Whatever happens happens in God’s time, not mine. Things are going in the right direction.”

Mr. Nealis pointed out that the school’s last major capital project, the gymnasium-community center, was dedicated in 2002 – some six decades after the plans were first developed.

He agreed that God’s time is not always man’s time, but he added that “I’m not leaving St. Frances Academy until this campus is expanded.”

“We dream about a lot of things,” she said, “might as well aim high.”