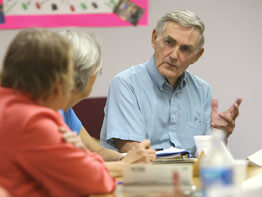 When lifelong Washington, D.C., area native Bill Hocking recently moved to Annapolis to be closer to family members, he was on a spiritual quest.

Standing in front of the inaugural gathering of the Spirituality for the 21st Century: Where Faith and Life Connect seminar at St. Andrew by the Bay Sept. 11, Mr. Hocking hoped his search was at an end.

“I need a time, a place and a community where I can get the stuff inside, out,” he told the group sitting in the parish hall. “It’s a place where I can talk about my relationship with God, what I should believe in and what I want to believe. There isn’t any place I can go where I can be free.”

Mr. Hocking was not alone. Throughout the sessions, people expressed similar desires.

“I think it shows there is a real thirst and hunger for a venue for sharing spirituality and feeling,” said Deacon James C. Monaghan, St. Andrew’s pastoral associate. “People are interested and are going to participate if it’s available.”

The group will meet twice a month to discuss books by or about some of the 20th century’s most provocative thinkers and activists. The books will become catalysts for spiritual reflection and conversation.

The first session featured the book “Why We Can’t Wait” by the Rev. Dr. Martin Luther King Jr., with a conversation led by Deacon Monaghan. The first session had 18 participants, and more are expected to finish the discussion of Dr. King’s book Sept. 24.

Authors and activists such as Thomas Merton, Richard Rohr, Mahatma Gandhi and Blessed Mother Teresa of Calcutta among others will be discussed during the seminars, which run through next June.

People from various Anne Arundel County parishes reflected upon the life of the civil rights leader, while exploring their own biases and fears four decades after his assassination.

“This was a good group,” Deacon Monaghan said after the 90-minute session. “I had material for another three hours. We’re hoping the group will continue, they’ll be engaged and think it’s worthwhile.”

Mr. Hocking says the group will explore spirituality in depth.

“The secret is,” he said, touching his heart, “you can really come talk about what’s in here.”