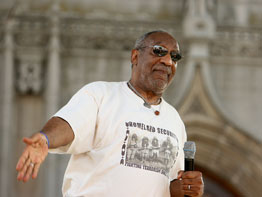 Bill Cosby can speak on any stage in the country with no questions asked – except for the lawn of St. Ambrose in Park Heights.

Father Paul Zaborowski, O.F.M. Cap., the church’s pastor, had one demand for the comedian before he addressed a crowd of hundreds at a July 31 Baltimore City-organized neighborhood block party: He needed to speak with the youths of the parish.

“That’s all we asked for, and the children just loved it,” said Father Zaborowski. “He came from inner-city experiences as well and made it big. It’s a really good example for them and it’s very important.”

Minutes after offering words of encouragement for the children of St. Ambrose, Mr. Cosby emerged from the church’s front doors to a throng of admirers. Locals pressed forward to get close to a gate surrounding the large stage on the church lawn, and camera flashbulbs popped as he came into view.

Nonetheless, there was a sense of calm throughout the speech by the 71-year-old Cosby.

“It’s a wonderful experience, not only for the parish, but for the community,” Augustine Stith, 65, said. “I don’t know if it’s his talk or whatever, but people are saying ‘excuse me’ and have been so nice and so warm.”

The one-time television star spoke in front of the facade of St. Ambrose, which, as Father Zaborowski says, rises figuratively and literally above the depressed Park Heights community. As local television news cameras captured Mr. Cosby, the church showed off its own mega-wattage stardom.

“It’s good for our parish, to be alive in our neighborhood and to reach out,” said Father Zaborowski, surrounded by thrilled parishioners.

“There’s no love out there,” Mr. Cosby said of the street life. “The only thing out there is how to write your entrance exam to jail. We’ve got to teach. The church is open. Go on in.”

Mr. Cosby has been the source of controversy when he has addressed mostly black audiences. His criticisms of men fathering children out of wedlock have been called divisive. He spent most of his Baltimore speech, however, imploring his audience to seek self-improvement and to build pride within their community.

Young people of St. Ambrose said Mr. Cosby’s message of hope at St. Ambrose could be a catalyst for change.

“It means a lot for someone that popular,” said Maulana Waters, 15, “to come out and speak to regular people like us.”