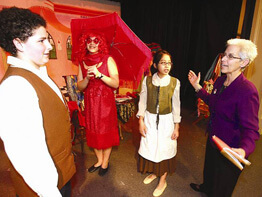 Marianne Seibel always knew the last show she ever did at St. Agnes School, Catonsville, would be “The Emperor’s New Clothes” by Hans Christian Andersen.

After 14 years of rehearsing with young actors, the Sacred Heart, Glyndon, parishioner is closing the curtain on her directing.

The final play will be performed April 2-3 at St. Agnes.

“Her influence and direction will be missed like a piece missing from a puzzle,” said Lydia Whitney, an eighth-grader who plays one of the fashion judges. “I feel sad for the sixth- and seventh-graders who didn’t get in because they won’t have Mrs. Seibel for guidance.”

Mrs. Seibel admitted that she has never acted before, but she tells her students that she acts in the classroom every day. Before teaching at St. Agnes, Mrs. Seibel taught religion at St. John, Westminster, for five years. It was there that she developed her directing talent after the principal asked her to direct the Living Stations performance.

After two years at St. Agnes, Mrs. Seibel was invited to sit in on auditions and continued to become more and more involved with each passing year.

“She puts a lot of work into the play. She gives us direction, and she has a lot of experience,” said Mary Clare Daschbach, who plays the empress. “She loves doing what she does.”

“It’s easier to make the younger kids believe, but it is a challenge to get the older kids excited,” said Mrs. Seibel. “This is our gift to the younger children.”

Mrs. Seibel said plays are an outlet for students and allow them to have a moment in the spotlight. She said she will miss watching her cast grow and bond as a team, but she will cherish her memories.

“I can honestly say there weren’t many days that I woke up and said I don’t want to go there today. This is like family,” said the director. “I love what I do, and I’m happy to be leaving it while I still love it.”