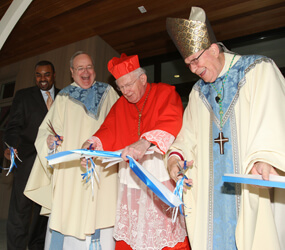 Sunlight streaked through the stained-glass windows of the historic chapel on the grounds of the St. Mary’s Spiritual Center and Historic Site Sept. 13.

The moment was sweet for Sulpician Father John C. Kemper as he helped bring a special Mass to a close. Days of rain had made the site’s director nervous, but after 15 months of construction, a new adjoining visitor’s center was ready for a blessing and there wasn’t a cloud in the sky.

Father Kemper told attendees: “I thought to myself ‘How am I ever going to entertain 200 of our friends in the pouring rain?’ We are grateful to God for this beautiful day, for this wonderful opportunity to gather and for the splendid visitor center we will go now and bless.”

Minutes later, hundreds stood on the Paca Street grounds where saints have roamed and watched Archbishop Émilius Goulet of the Archdiocese of Saint Bonafice in Canada and Cardinal William H. Keeler, retired Archbishop of Baltimore, bless the center and cut a ribbon to open it officially to the public.

The center, designed by GWWO and built by Henry H. Lewis Contractors, is just one of the site’s newest features. An expanded parking lot and entrance area have been added along with fresh landscaping.

Archbishop Goulet told those in attendance that people who come to the visitor’s center will experience “the living history” of the St. Mary’s Spiritual Center and Historical Site.

It’s quite a history and one that is on full display inside the center, which has historical documents, articles of clothing, artifacts, a gift shop and a state of the art meeting room equipped with the latest audio and visual technology.

The spiritual center and historical site is sacred ground. It is the site of the U.S.’s first seminary, St. Mary’s College and Seminary, which was founded by the Society of St. Sulpice fathers and opened in 1791. St. Mary’s is now based in Roland Park.

As the chapel was dedicated June 16, 1808, St. Elizabeth Ann Seton arrived with her family to begin a legendary education ministry for women. She later took her vows in the lower chapel and lived on site for a year before moving to Emmitsburg.

Oblate Sister of Providence Annette Beecham, the former superior general, was awestruck as she walked the halls of the visitor’s center.

“We wouldn’t have missed it,” Sister Annette said. “Our hearts are lifted. We share in the joy of the Sulpicians, primarily because we’ll be sharing with everyone else. We’ve been coming here when it had little or nothing and it was still great. It was great then, but of course it’s wonderful now.”

Father Kemper thanked all three and said their presence showed “a sign of the archdiocesan support of what we’re doing here at this historic site.”

To view a slide show from the center’s opening, click here.