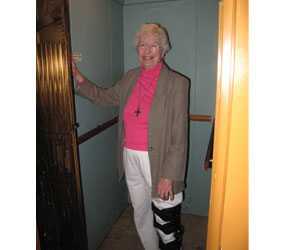 Getting trapped for three days and four nights in a cramped 5-by-4 elevator is not most people’s idea of an opportunity for spiritual renewal. Then again, most people aren’t like Sister Margaret Geary.

The Sister of Notre Dame de Namur found herself stuck in her convent’s elevator at St. Mary of the Assumption in Govans President’s Day weekend. Other sisters and the staff of Notre Dame AmeriCorps, which is housed in the convent, were away for a four-day conference.

“I thought, ‘This can’t happen,’” said Sister Margaret, recalling her immediate response when the 66-year-old elevator locked up about two feet off the first floor.

She tried pushing the inside elevator door, but the electricity went off. There was no way to get the door open and her cell phone wasn’t getting a signal.

Sister Margaret resigned herself to the reality that she would probably not be rescued for several days. Rather than panicking, she focused on prayer.

“I believe that God’s presence was my strength and my joy – really,” said the 85-year-old Connecticut native, who is recuperating from a recent fall that fractured her knee.

“I felt God’s presence almost immediately,” she said. “I felt like he provided that opportunity for a closer relationship.”

Not long into her trial, Sister Margaret pulled out a pair of well-worn rosary beads. She fixed the broken strand and went to work.

“I said the 15 decades of the rosary over a long space of time,” said Sister Margaret, who had just read an introduction to St. Teresa of Avila’s “Interior Castle.” “I took time to think about each of the mysteries and to pray them attentively.”

For exercise and further peace of mind, Sister Margaret practiced some yoga – stretching her arms to the ceiling and then touching the floor with both hands.

The nun had carried a jar of water with celery sticks onto the elevator, which provided sustenance for three days and four nights. She also licked cough drops to keep her mouth from drying out.

Sister Margaret spent a lot of time sleeping – curled up in the tight quarters and using her balled-up sweater as a pillow and her purse for back support. She coped as well as she could without facilities.

An AmeriCorps volunteer returned to the convent the morning of Tuesday, Feb. 26, and discovered Sister Margaret’s predicament. After she was finally freed, Sister Margaret hugged her rescuer and enjoyed a glass of orange juice.

“It never tasted so good,” she recalled with a laugh.

Sister Kathleen O’Brien, a fellow Sister of Notre Dame de Namur, insisted that her friend be taken to Good Samaritan Hospital in Baltimore, where Sister Kathleen spent the night as a precaution.

“Her inner resources are really what helped her,” Sister Kathleen said. “She was able to call on that and really focus herself.”

Despite her ordeal – which she refers to as a “gift” – Sister Margaret said she isn’t afraid to use the elevator. She has one caveat.

“I never get on it when no one is home,” she said.