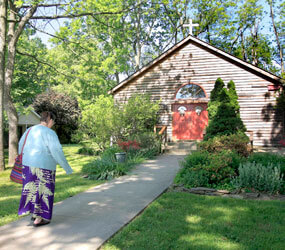 WILMINGTON, Del. – For the past 36 years, Larry Bucci has traveled about 40 miles to Malvern, Pa., on the last weekend in April to participate in the Archbishop FitzMaurice men’s retreat at Malvern Retreat House, also known as St. Joseph’s-in-the-Hills.

The number of men who make the Archbishop FitzMaurice retreat has declined over the past decade, from more than 300 to the 220 who gathered this year. The lingering effects of the recession and increased time pressures on families today are mostly to blame for the decrease, said Bucci, who heads efforts to recruit men for the retreat.

“It’s been a challenge, more so in the last three years because of the economic situation,” he told The Dialog, Wilmington’s diocesan newspaper.

Centers such as Malvern, Jesus House Prayer and Renewal Center in Wilmington and the Franciscan Spiritual Center in Aston, Pa., have survived the economic and time pressures and other challenges.

Those challenges include increased competition from parish-based spiritual development and faith formation programs and from websites such as the DeSales Spirituality Center, operated by the Wilmington-based Oblates of St. Francis de Sales, which includes daily Scripture reflections and online retreats.

Others have not been as fortunate. St. Pius X retreat center in Blackwood, N.J., which will close June 30, will be at least the sixth center in the region to close in recent years.

“While this has been a difficult decision for all involved, we also know that we could not continue to operate this way indefinitely,” said Oblate Father Frank Danella in an article in the Catholic Star Herald, Camden’s diocesan newspaper. The paper also reported that retreat centers nationwide have struggled with declining attendance, the busy schedules of people today and rising personnel costs.

Jesus House co-director Chris Malmgren cites a series of coincidences – he considers them signs from God – that have allowed the addition of a chapel and housing units and helped meet regular expenses.

“I keep asking, in my practical side, ‘How are we doing this?’ “ said Malmgren, who opened the center 35 years ago with his wife, Angela. “I’m finding more and more my faith is growing deeper because we make it. I don’t know how, but we make it.”

Controlling costs continues to be a major challenge.

“Our philosophy, and probably the philosophy for most of the places, is to never make the facility too expensive for people,” despite increased costs for heating oil, electricity, insurance and food, Malmgren said. Jesus House relies on fundraisers and donations to cover the difference between income and the actual cost of operation.

Somehow things seem to fall in place. Not long ago, a supporter asked Malmgren what it cost per day to keep the center open – $700 “with everything under the sun” was his response. Soon, Malmgren was receiving requests from people who wanted sponsor a day for $700, saying something like, “Well, I’d like to have July 1 in honor of my mother.”

The cost of a weekend retreat at Franciscan Spiritual Center will increase to $170 in October – up $10 and the first increase in about eight years, said Franciscan Sister Christa Marie Thompson, the center’s director. She cited rising expenses as the reason.

Catholic centers face different expectations regarding fees than a Protestant center would, said Anne Luther, who was executive director of Retreats International, a national organization of Catholic retreat centers that disbanded several years ago.

“Especially when it comes to Catholics, there’s a sense that anything that is spiritual should be free,” said Luther, who teaches spiritual direction at Loyola University in Chicago and also operates a small retreat house. For the same retreat, she said, Catholics are shocked by the high fee, while non-Catholics marvel at its low cost.

Luther believes retreat centers have opportunities as well as challenges. “There’s a huge market,” she said, but “some of us have to get a bit creative.”

Malvern Retreat House provides an example of how to increase the market. Since its facilities were geared toward male retreatants, Malvern opened a new building six years ago, the McShain-Horstmann Family Life Center, that allows the center to also offer retreats for women, children, families and married couples.

For the Oblates of St. Francis de Sales, the Internet provided a creative opportunity for DeSales Spirituality Center, once housed at the now-defunct Oblate School of Theology in Washington.

“Since people would no longer be coming to us at a specific street address, we chose to develop Web resources that would meet people where they are while continuing to offer on-site programs at parishes, schools and other ministries,” said Father Michael Murray, the center’s director.