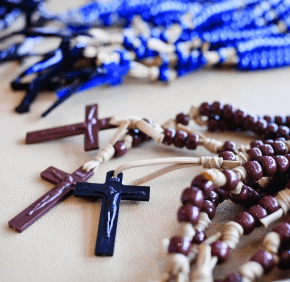 By George P. Matysek
gmatysek@catholicreview.org
What started out as the ministry of a handful of volunteers at St. Mary in Annapolis has grown into an international phenomenon that is putting rosaries into the hands of members of the U.S. armed forces across the globe.
This spring, the Annapolis-based Ranger Rosary Network made and distributed its one millionth military rosary. That means volunteers have lovingly threaded 59 million beads since the ministry began 11 years ago.
“It’s a miracle,” said Pat Evans, a St. Mary parishioner and president of the non-profit organization. “Chaplains from all over the world are asking for our rosaries – and many of them aren’t even Catholic.”

Florence “Fay” MacCallum, who served in the British service during WWII, strings together a rosary for the Ranger Rosaries project at St. John Neumann Mission Church in Annapolis. (Tom McCarthy Jr. | CR Staff)

Ranger rosaries were the idea of Frank V. Ristaino, a St. Mary parishioner. During military training in the Maryland Army National Guard., Ristaino used parachute cord and beads during land navigation drills, pulling one of the beads down the cord every 72 paces to indicate he had walked 100 meters. During one of those drills, it struck him that the cord and beads would be perfect for a rosary.
Much more durable than most prayer beads, the ranger rosaries contain no metal parts that would reflect light or make rattling sounds in the field. They are made in a variety of colors that match the military uniforms of the various branches of service.
Mari Brady, treasurer of Ranger Rosary Partners, said there are currently approximately 10 parishes in the Archdiocese of Baltimore and many more throughout the country that make the rosaries. The religious symbols are funded with donations and blessed by the Redemptorist priests of the parish before they are distributed.
“There are so many groups doing things to support the military,” said Brady, a former employee with the Department of Defense and the Department of Veterans Affairs, “but not many address the spiritual needs of the troops. We are thrilled to show our support and also provide spiritual comfort.”
Visit rangerrosary.com or call 410-990-4100 ext. 4714 for more information.
Also see:
New Cumberland memorial honors babies who died
St. Augustine parishioner fighting cancer: ‘I never walked alone’
PrevNext