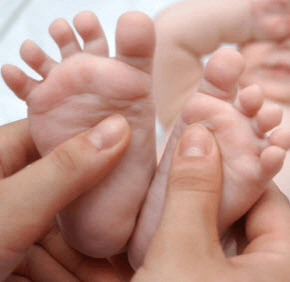 By George P. Matysek Jr.
gmatysek@CatholicReview.org
Unborn babies in danger of losing their lives to abortion, illness or dire medical conditions are being remembered in daily prayer throughout the Archdiocese of Baltimore as part of a “spiritual adoption” program.
Participants in parishes and schools filled out special prayer cards in October, pledging to pray for the babies and their mothers for nine months. At the end of campaign, baby showers will be held to collect clothes and other supplies that will be donated to area pregnancy centers.
As part of the effort, posters depicting the development of unborn children are being displayed in parishes and schools. Linda Brenegan, respect life program director for the Archdiocese of Baltimore, designed the posters 14 years ago using her own pastel depictions of developing babies. The posters feature phrases such as “my heart started beating today” or “mommy felt me kick today” – indicating a fetus’ growth for a particular month. They have been translated into eight languages and are used in approximately 7,000 parishes and schools throughout the nation.
The idea for spiritual adoption was first promoted by Bishop Fulton Sheen, the famous Catholic televangelist whose sainthood cause is now under consideration. It was launched in Baltimore parishes several years ago.
“It’s such a simple and positive thing to do,” Brenegan said.
The parishioner of Cathedral of Mary Our Queen in Homeland noted that those participating in the spiritual adoption program have the option of “naming” the unborn babies they are remembering in prayer.
“The idea is to remind people and confirm that they are praying for a specific baby,” Brenegan said.
While the child usually remains unknown to his or her “spiritual parent,” Brenegan noted that several people have shared stories about how they actually met their spiritually adopted baby.
Among participating high schools, Brenegan said, The Catholic High School of Baltimore has approximately 150 students who have filled out pledge cards. Our Lady of Mount Carmel School in Essex includes almost its entire study body in the program, she said.
Holy Family in Randallstown is among the parishes that is launching the spiritual adoption for the first time this year. Kathy Parkerson, respect life coordinator for the faith community, said more than 150 parishioners filled out cards last month – representing approximately 30 percent of weekend Mass attendees.
“That’s really good for a pilot program,” said Parkerson, pointing out that the parish’s baby shower will benefit Pregnancy Center West in Catonsville.
While October was a popular month to launch the spiritual adoption program, Brenegan said it could be started at any time. Some parishes and institutions chose begin it on the Feast of the Annunciation in March, while others connect it to the annual March for Life in January. Alternatives to baby showers at the conclusion of the campaign could include holding “birthday parties” and collecting monetary donations for expectant mothers, Brenegan said.
“This is such a big issue in our country,” Parkerson said. “Prayer is the best place to start. It doesn’t matter how old you are. You can keep this parent and baby in your prayers. It makes a difference.”
For more information and resources, visit bitly.com/spiritualadoption.
Also see:
Black history on display at St. Frances Academy
Dad’s kidney keeps daughter going
PrevNext