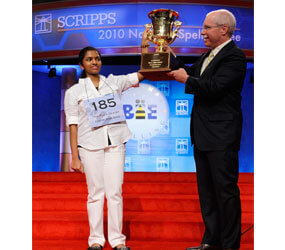 Her parents, Alagaiya and Malar Veeramani, and her brother, Ashwin, all helped her prepare for the national competition in Washington.

“My mom was my coach, and my 10-year-old little brother loves to spell and helped me as well,” Anamika told Catholic News Service in a telephone interview from Ohio.

According to the Merriam-Webster’s Medical Dictionary, stromuhr is a rheometer designed to measure the amount and speed of blood flow through an artery.

Anamika studied two to three hours on weekdays because of homework, but an extended eight to nine hours on the weekends. The 14-year old has been spelling since she was 7.

“I try to expose myself to as many words as possible,” Anamika said, “and especially enjoy reading fiction and fantasy books.”

At school, the teacher Anamika had in fourth grade acted as her spelling coach, providing Anamika with interesting words and Scripps lists for the week to help her study. The teen said all her teachers were supportive and accommodated her, allocating some in-class study time.

Scott Remer’s book, “Words of Wisdom: Keys to Success in the Scripps National Spelling Bee,” gave her invaluable help in preparing for the bee, Anamika said. Remer gave her a draft of the book last year.
Remer, who will be a junior at Beachwood High School in the fall, is a two-time winner of the Cleveland Plain Dealer-sponsored Cuyahoga County Scripps Spelling Bee and a nationalist finalist, placing 34th and fourth during his two years of participation.

The 292-page guidebook – which he spent 16 months writing – consists of different sections with specific set of skills or goals to work on, with 100-plus exercises, spelling tests and activities where readers can absorb more than 10,000 regional and national level words.

During the final round of the national bee, Shantanu Srivatsa was Anamika’s last competitor but was disqualified after incorrectly spelling “ochidore.” Anamika became the third consecutive Indian-American bee champion, winning more than $40,000 in cash and prizes.

Although, according to the 2000 census data, Indian-Americans comprise less than 1 percent of the U.S. population, eight of the past 12 competitors were of this ethnicity.

“Making it to finals was an amazing experience,” Anamika told CNS. “I was interviewed by ABC, had my hair and makeup professionally done, and was treated to a five-course lunch and dinner. The friends I made at finals are invaluable. I have been friends with last year’s winner, Kavya Shivashankar, from Kansas since the fourth grade, and she is someone I look up to.”

On June 7, Anamika graduated from eight grade at the Incarnate Word Academy in Parma Heights, Ohio, where she has attended since kindergarten. “I am really close to the girls there, and want to congratulate my class on graduating.”

The academy is operated by the Sisters of the Incarnate Word.

In the fall, Anamika is attending Laurel School for Girls in Cleveland for high school. “I’m really excited to start,” she said. “It’s a small school, but I like that.”

Anamika said she was sad that her spelling competition days are over – national champions cannot compete again – but she is happy to have won. And this Ohio girl has many interests to keep her busy.

She takes private lessons for Indian classical dance and for golf, and she is also a musician. Anamika is a member of her school’s orchestra and has been studying Indian classical music and violin for eight and six years, respectively.

With big dreams for the future, she aspires to attend Harvard and eventually become a cardiovascular surgeon.

“If you really love something, keep doing it,” Anamika said, passing on advice she has received. “You’ll eventually succeed at something if it’s something you love and work hard for.”

Her own advice for spelling competitors? “It’s never too early to start, it’s anyone’s game,” she said. “Spelling has been a really amazing experience and preparing and competing for Scripps teaches you so much about perseverance and dedication.”