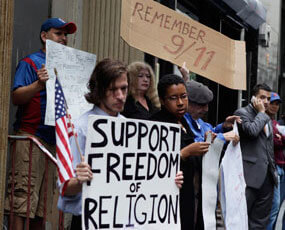 WASHINGTON – Jewish, evangelical and Catholic speakers, some with backgrounds in national security and interfaith relations, called the controversy over plans to build an Islamic community center and mosque a few blocks from ground zero in New York “contrived” and likely to help those who would recruit potential terrorists.

“The individuals and organizations who are contriving this controversy seem to will that (a war with Islam) will come into existence,” said Andrew Bacevich, a retired Army officer and professor of international relations at Boston University, in a Sept. 1 teleconference organized by the group Faith in Public Life. “It is absolutely imperative that we act together to deny them this.”

Meanwhile, in an interview with the Wall Street Journal the same day, New York Archbishop Timothy M. Dolan said he was working with Jewish and Muslim religious leaders to identify clerics and laypeople to invite to interreligious discussions to work out conflicts as they occur.

“I’m afraid we have maybe not been as energetic with fostering relations with our Islamic brothers and sisters,’’ the Journal quoted the archbishop as saying in an interview. “Our coming together is not to say we can settle the mosque site issue,’’ but “the wider issue of church, Jewish, Islamic tensions.”

At an impromptu news conference Aug. 18, Archbishop Dolan offered to mediate the dispute over the location of the planned Islamic center. He noted that “as Catholics, we ourselves are somewhat touchy about this issue because in the past we have been discriminated against.”

In the Faith in Public Life teleconference, Bacevich, whose background is in national security, said, “Whether intentionally or not, the contrived mosque controversy wrongly and wrongheadedly conveys the impression that the United States views Islam itself as a national security threat.”

“Speaking as a Catholic – a religion subject to considerable discrimination – I cherish the fact that I can be a full citizen and also be committed to my faith tradition,” said Bacevich. “I find it unacceptable and deeply un-American to deny adherents of other faith traditions the freedoms I have enjoyed.”

The Rev. David Gushee, professor of Christian ethics at Mercer University in Atlanta and co-founder and board chairman of the New Evangelical Partnership for the Common Good, said in the teleconference that he’s been disappointed by the low profile religious leaders have taken in the controversy over the cultural center.

“We are not in a moment of great religious leadership in the United States,” Rev. Gushee said. “We lack many religious leaders who will stand above the fray and say, ‘Here’s what our faith commands,’“ instead standing back and letting popular opinion frame the discussion, he said.

He said an effort was being launched in early September to organize voices of religious leaders on the topic. So far, they have not been “as overwhelming, loud or articulate as would have been hoped,” he said. “So far they have been pretty quiet and it’s disappointing.”

Another speaker, Matthew Alexander, a counterterrorism expert, said the conflict with al-Qaida is not only about stopping terrorist attacks, but also about “defeating their ability to recruit new members.”

The center, known as Park51, “would be a powerful symbol of U.S. tolerance and freedom that will stand in direct contradiction to al-Qaida’s narrative that Americans hate Muslims,” said Alexander, who won a Bronze Star for leading an interrogations team that located Abu Musab al Zarqawi, the former leader of al-Qaida in Iraq.

“As a symbol, its construction demonstrates that the United States is not at war with Islam and that Muslims are welcome in America,” Alexander said. “It communicates a message of moderation that stands in stark contrast to al-Qaida’s bankrupt ideology. Symbols like this matter. Abu Ghraib, Guantanamo Bay and the policy of torture and abuse handed al-Qaida its No. 1 recruiting tool. Those who think a-Qaida will not be able to spin this controversy to their advantage are disastrously mistaken.”

Simon Greer, president of Jewish Funds for Justice, said the debate about the center “is not merely a question of freedom of religion, or national security, or how we honor those who died on 9/11, although it is all of those things. It is fundamentally a question about whose path we are following during this economic crisis: the tea party path of isolation and exclusion, or a different path of interconnectedness and inclusion.”

Public outcry erupted this summer over plans to convert a former Burlington Coat Factory store, located a little more than two blocks from the World Trade Center complex, into a nine-story Islamic cultural center, with a mosque included. The area’s Muslim community already uses the vacant retail space for worshippers who overflow from the al-Farah Mosque, about a dozen blocks north of the trade center property, according to The Associated Press.

Critics in New York and beyond have decried the project as an insult to the memory of those who died in the 9/11 attacks on the World Trade Center towers. Supporters of the project argue that the right to religious freedom means the Muslim group is entitled to build on the site and point out that the proposed spot is in fact about six blocks from the nearest of the two towers destroyed in 2001.