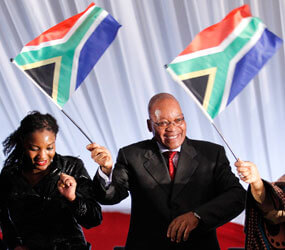 Zuma’s public disclosure April 25 that he recently tested negative for HIV, the virus that causes AIDS, “is very significant in this country where the stigma attached to AIDS is so strong,” said Dominican Father Mike Deeb, director of the justice and peace department of the Southern African Catholic Bishops’ Conference.

A new government initiative aims to test 15 million people by the end of June 2011 and to provide antiretroviral drugs to 80 percent of South Africans in need of treatment. At the initiative’s launch April 25 at Natalspruit Hospital, east of Johannesburg, Zuma, 68, said the country would need to tap retired health workers to help staff the campaign. He added that his recent test was the third time he had been tested.

“So many people are afraid of being tested and Zuma’s action could give others courage,” Father Deeb told Catholic News Service, noting that with “lifesaving treatment available, it might be devastating for people to find out they are HIV-positive, but it is not the end of the world.”

Many people “will have viewed Zuma’s testing with cynicism, but they should separate their views of his own sexual morality from the importance of the president saying that he has been tested for HIV and making the results public,” Father Deeb said.

“Zuma’s testing is a symbol of a new political willingness to address the crisis of AIDS,” he said.

In February, South Africa’s bishops criticized Zuma’s “scandalous behavior” after he admitted fathering a child out of wedlock.

The bishops said in a statement they were appalled at the “irreparable damage that such immorality has done to the nation’s efforts to slow down or even to reverse the rampant spread of HIV and AIDS.”

Zuma, 67, has three wives and a fiancee. The child he fathered out of wedlock, with a prominent banker, is widely reported as his 20th.

Zuma’s predecessor, Thabo Mbeki, was widely criticized for his stance on AIDS, including his questioning of the link between HIV and AIDS.

During his 1999-2008 presidency, Mbeki’s administration angered many health experts by failing to provide antiretroviral drugs and by pushing foods such as beet root and garlic as an alternative treatment for HIV.

Father Peter-John Pearson, head of the bishops’ parliamentary liaison office in Cape Town, said “leaders must lead by example,” and Zuma’s public disclosure of his HIV status “could bring about honest discussion, change attitudes” and encourage people to be tested.

“The provisions for treatment are there now, and we need to get people who need treatment on to the program,” he said.

In an April 15 briefing for legislators, two days after South African Health Minister Aaron Motsoaledi presented his budget to Parliament, Father Pearson commended the government on its efforts to stop the spread of HIV and AIDS. The priest praised plans to ensure that all of the health department’s 4,300 clinics and hospitals provide antiretrovirals and other medicine that will “contribute significantly to reducing morbidity, disease progression and mortality associated with” tuberculosis and AIDS.

Father Pearson said it was good to see the government “finally finding resonance in this new effort to tackle the pandemic responsibly.”

Motsoaledi acknowledged that HIV is the largest public health problem facing the country and that there were concerns about a decline in life expectancy, the ineffectiveness of the health system, the poor quality of services and unacceptably high maternal and infant mortality rates.

Father Pearson also noted the health department’s commitment to reducing new infections by 50 percent in the next two years.

“Primary prevention will remain the mainstay of all efforts to combat HIV and AIDS,” and counseling “will be comprehensive and multidisciplinary and will include help with issues such as the abuse of alcohol, which often precedes risky sexual behavior,” he said in his briefing.