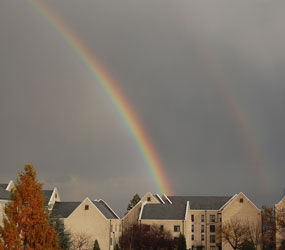 It’s the second discovery, though, that has people talking.

A few days after the double rainbow, a worker discovered a pot of gold – literally at the end of the rainbow.

While raking leaves at the Mount’s National Shrine Grotto of Our Lady of Lourdes, the worker uncovered two bags of gold and silver coins in what appeared to be a donation to the shrine.

“We’re in the process of trying to raise the money to build the Pilgrim Center here (at the) Mount and when I saw the gold and silver coins, I immediately thought our prayers were answered,” said Bill Tronolone, director of the shrine. “The Grotto is where people come to pray and maybe this is someone’s way of thanking God for their blessings.”

The coins of various denominations were said to be worth over $40,000 and were in two bags tucked under some leaves. The discovery of the rare coins was reported to the Frederick County Sheriff’s Department.

Since the discovery, a claim was made for the small treasure and after an investigation, the coins have been returned to its rightful owner.

“The owner just wanted a safe place to keep her life savings while she left town and in her thinking, what better place than the Grotto, right next to the statue of Mary,” Tronolone said..

The shrine is the oldest known replica of the revered French shrine, dating to about 1875 (the original Lourdes apparitions were in 1858). The Grotto has been in use since 1805, when Fr. John Dubois founded it as a place of prayer and devotion.