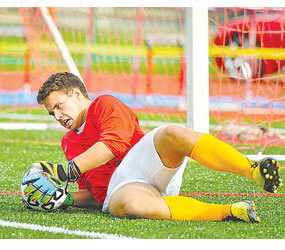 As a soccer goalie, John Dillon is the last line of defense for his team.

The Calvert Hall senior wouldn’t have it any other way.

Dillon has been playing soccer for more than a decade, and grew into the role of goalie – literally.

“When I was growing up,” Dillon said, “I was one of the biggest kids, so I took to goalie and it stuck ever since I was young.”

He also plays baseball for the Cardinals, but prefers soccer, which he has played most of his life.

“I love the team aspect of the sport,” Dillon said. “It’s exciting when goals are scored, more so than in other sports since the goals are rare. That’s what makes it so exciting.”

Dillon has played soccer all four years for the Cardinals, this season and last as a varsity starter. As goalie, he is essentially the field general for the defense, responsible for communicating what he views the opposition doing as well as ensuring his defenders are lined up correctly.

“There’s a lot of pressure going into it all,” Dillon said. “When you win a game there’s a great feeling of accomplishment – you won because the other team didn’t score on you.”

Dillon’s soccer coach is more than confident that he can handle all of that pressure.

“Your goalkeeper has to be somebody that everybody on the field trusts,” said Andrew Moore. “It helps to have a smart one like John. That’s a key foundation to any soccer team – to have a goalkeeper who can communicate and lead, see the field and communicate it to his teammates.”

Moore is also director of the McMullen Scholars Program. Dillon is a member; Moore is just as impressed with his abilities as a student.

“He’s about as good as they get,” Moore said. “The kids in our scholars’ program go to fantastic schools and get a lot of scholarships, and John is one of the top kids in our program.”

Dillon’s school activities extend beyond the classroom and soccer field, as he is also the lead vocalist in Calvert Hall’s liturgy band. His love for music and encouragement from friends and family led him to join last year, though he said it is a position more nerve-racking than being on the soccer field.

“I’m always singing when I’m walking around during the day,” Dillon said. “I wasn’t involved with anything musical at school. I liked to sing and this was the best way to get involved. It’s still new to me – mornings of the liturgy I get that nervous feeling but eventually it settles down.”

Dillon is also a member of the Hallmen Chorus, Chamber Chorus, and the National Honor Society. He is a parishioner of St. Margaret, Bel Air, and is considering attending the University of Maryland in College Park next year.