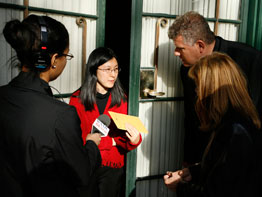 WASHINGTON – Members of the Survivors’ Network of those Abused by Priests are calling for Cardinal Bernard F. Law’s retirement and subsequent removal from eight Vatican congregations before the pope’s visit to the United States in April.

Barbara Blaine of Chicago, president of the Survivors’ Network of those Abused by Priests, along with three other SNAP members, personally delivered a letter to the Vatican Embassy in Washington Jan. 9 stating their desire that Cardinal Law, former archbishop of Boston, officially retire. The letter was addressed to Pope Benedict XVI in care of Archbishop Pietro Sambi, the apostolic nuncio to the United States.

Cardinal Law, archpriest of St. Mary Major Basilica in Rome since 2004, will turn 77 in November. A former bishop of Springfield-Cape Girardeau, Mo., he was archbishop of Boston from 1984 until he resigned in December 2002 in the wake of controversy over his handling of cases of sexual abuse committed by Boston priests.

The letter to Pope Benedict was signed by Blaine and five SNAP directors. It also included a signature of support from Mary Pat Fox, president of Voice of the Faithful, a national Catholic lay organization formed in response to the clergy abuse crisis.

The letter was accepted by an embassy secretary. A woman at the embassy told Catholic News Service Jan. 9 that embassy officials would not comment on the letter.

The letter asked the pope to “insist that Cardinal Law honor the mandatory retirement age for bishops and step down before you visit the U.S. this spring,” saying a “a more clear, simple and effective step (that) could better ease our suffering is hard to imagine.”

Canon law requires bishops to turn their resignation in to the pope when they reach 75, but the pope may or may not accept it at that time. Even when a cardinal retires in his 70s, he remains an active member of the College of Cardinals, eligible to enter a conclave and vote for a new pope, until age 80.

“The continued high-profile status and influence of Cardinal Bernard Law, in the literal and figurative center of Catholic power, rubs even more salt into the still fresh and very deep wounds of thousands,” it continued.

The letter described Cardinal Law’s membership in eight Vatican congregations as giving him “a particularly troubling, powerful role in the selection of new bishops.”

“This, coupled with his increasing public visibility, again exacerbates intense pain among many,” the letter said.

According to the 2007 edition of the Vatican yearbook, known as the Annuario Pontificio, Cardinal Law is a member of the congregations for Eastern Churches; Divine Worship and the Sacraments; Bishops; Evangelization of Peoples; Clergy; Institutes of Consecrated Life and Societies of Apostolic Life; and Catholic Education. He is also a member of the Pontifical Council for the Family.

The letter from SNAP members also mentioned a proposal in early January by a Vatican official calling for prayers to seek spiritual reparation for the damage caused by the sexual abuse of children by priests.

The letter expressed gratitude for the initiative, but also said “words alone won’t heal these deep and ongoing wounds” of abuse.

On the sidewalk in front of the Vatican Embassy, Blaine said she hoped the pope would address clergy sexual abuse in his visit to the United States, calling it a “primary issue” for U.S. Catholics. She also said she was “not convinced the Holy Father has heard the reality” of the extent and impact of clergy abuse in this country.