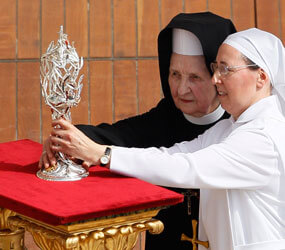 Weather forecasts of a weekend of heavy rains turned into innocuous grey clouds April 30 and then sunny skies May 1.

“We prayed to John Paul that it wouldn’t rain,” said Josephine Faehrmann from Sydney, Australia, who was planning to sleep outside with her friends.

Also, mysterious benefactors with a special devotion to the Polish pope paid for a bus full of young people from Naples to attend the ceremonies “because John Paul II loved young people and we had to be here,” Rosa Giordano said.

Each of the more than one million people of every age, background and nationality attending the April 30 vigil in Circus Maximus and May 1 beatification in St. Peter’s Square had his or her own story of pilgrimage.

Danila Fabrizio, another member of the group that left Naples at 1 a.m. May 1 on the benefactor’s bus, said, “This is a sign of God’s providence that we’re here.”

The secret benefactors also supplied rosaries, prayer cards and a poster of the new blessed “to hang up in the back window of the bus, but it wouldn’t stick because of the humidity,” said Danila Fabrizio.

Valeria Buonpastore from Charlotte, N.C., was on the bus from Naples and said she had been planning to watch the ceremony on television from her home. But then a friend told her there was a free bus with two seats that had just opened up if she wanted to go. “It’s really a miracle that I’m here,” she said.

Thibaut Cappe, 23, from Paris, who came with a group of 12 people, said they had nowhere to spend the night, but someone in Rome invited them to stay in his very nice apartment.

“It was awesome. We were very lucky. Many people slept in the street,” Cappe said. He said they got up at 3 a.m. and managed to get a spot halfway up Via della Conciliazione, the wide boulevard leading up to St. Peter’s Basilica.

Another group from Paris was not so lucky. They were blocked in the same spot near a hospital by the river several blocks from the square since 6 p.m. April 30, said Carole Deverre. At 7:30 a.m. the next day they had still made no progress in getting closer to the square.

“We can’t see the (television) screen, there is no toilet. It’s not very pleasant,” she said. “But we are very happy to be here and right now we are going to pray to not be disappointed,” she said as the group’s parish priest pulled out his rosary to lead them in prayer.

But many came prepared and shared. One couple passed around a thermos of hot coffee while a group from Derry, Ireland, said they were handing out chips, cookies and snacks from their overflowing supply in an open suitcase on the ground.

The celebrations of the late pope’s beatification began at 8 p.m. April 30 in the grassy field of Circus Maximus, which was once a Roman race track.

Some groups had set up small tents and laid down blue tarps. Others sat on flattened cardboard boxes to protect themselves from the damp ground as they took part in three and half hours of prayer and reflection.

Volunteers wearing bright yellow vests with the words “Do not be afraid” handed out small boxed meals containing juice, an apple, baby carrots, a muffin and crackers. Others handed out candles to be lit at nightfall during the event.

Alice Arza, 16, from Pamplona, Spain, had a large U.S. flag wrapped around her shoulders. Her mother is American and “prays a lot to John Paul II,” she said.

Arza said her mom was ill and couldn’t come to the beatification, “so she told me to come here with the flag to show the United States loves the pope.”

When the vigil ended, about 100 people camped out in the damp, humid field cocooned inside gold Mylar blankets and sleeping bags. One young man sat wrapped in a blanket reading the Bible using the stage floodlights as a reading lamp.

Huge numbers of people walked in procession from the field to the eight Roman churches that were to be open all night for prayer, confession and Eucharistic adoration.

At least 1,000 people packed into the Church of St. Bartholomew on Tiber Island, and three priests were busy in the atrium hearing confessions.

The Community of Sant’Egidio led night prayer, and its founder, Andrea Riccardi, said the secret of Blessed Pope John Paul’s courage and the motivation for all he did “was the search for Jesus, beginning with his own prayer early each morning and continuing throughout the day.”

Paolo Ciani, a spokesman for Sant’Egidio, said they were going to pray until 3 a.m., then close the church and head to the Vatican, sleeping on the street in order to get a place in the square when it opened.

One woman from New Jersey, who asked not to be named, said her plan was to “hang out in bars until 3 a.m. then go to the churches” since she had no place to spend the night.

By 12:30 a.m. thousands of people had camped out along buildings, on strips of grass and on sidewalks several blocks from the Vatican since all access roads to St. Peter’s Square were closed. Others were awake waiting or chatting with security personnel trying to strategize when they could get closer to the square.

Isabel Marin, one of three 16-year-old girls from Madrid, Spain, said they stayed on the street all night and even though she had a brand new air mattress, she didn’t have room to unroll it.

“We were like maybe 10 when he died. Our parents have told us a lot about him and told us this was a great opportunity to grow our faith,” Marin said.

“Pope John Paul was a wonderful pope. He was like us. My mom showed me a video where he was watching a clown and really laughing. And I saw another video where he moved his feet when the people were singing, following the beat.”

About two hours before Mass began, to aid with the flow of the crowds, loudspeakers broadcast announcements urging people not to block the roads by sitting down and instead to “Rise, Let Us Be on Our Way,” which was the title of the late pope’s book in 2004. “This is a celebration for everyone, not for a few,” the speaker said, encouraging everyone to keep moving toward the square.

Contributing to this story were John Thavis at the Vatican and Cindy Wooden in Rome.