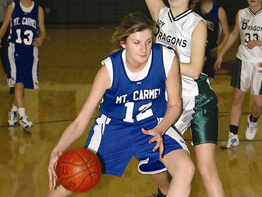 The Our Lady of Mount Carmel, Middle River, Lady Cougars are poised and prepped to defend their Interscholastic Athletic Association of Maryland C Conference title this season, maintaining a strong hold on first place of the Conference’s Y Division.

The Cougars are posting a 12-3 league record with their lone conference loss Dec. 20 to Beth Tfiloh, and are 16-3, overall.

“I wasn’t really sure where we would finish this season with Friends School and Catholic High coming down from the B Conference and Annapolis Area coming into the league,” said head coach and athletic director, Mike Naunton who is in his fifth season as head coach of the Cougars.

Naunton saw his 2006 championship team exceed expectations last season and noted that, “team success comes down to two things, skills and intangibles.” And for the Cougars then and now, chemistry is a huge part of the Mt. Carmel success story.

Whether it’s the pre-game shoot-arounds, the Subway stop before a game or the team ritual of noting something good that happened in each player and coach’s day, the Cougars have formed an unbreakable bond, giving credence to the intangibles that fosters teamwork and breeds success.

The team is led by senior point guard, Briana Grap. A four-year varsity player, Grap is the team’s captain and leads by example, both on the floor and off. Grap, a two-sport athlete, has scored more than 1,261 career points, a school record for both the boys and girls varsity basketball programs.

Averaging 16.6 points per game and 5.1 assists, Grap is a top-notch, focused competitor through and through. “She wants to succeed every time she’s out on the court. She understands the game very well and she has been so loyal to Mount Carmel,” said Naunton.

Grap is supported by seniors Sandra Liegute and Ernesta Griciunaite underneath and junior guard Meghan Hartnett. The Cougars fifth starter, sophomore Jonese Washington, played her last game with the Cougars in mid-January and has since moved out of state, leaving a huge void for Naunton to fill. Freshman, Kelly Brown has shown some promise with her quickness and ball-handling abilities and is seeing significant playing time as the season winds down.