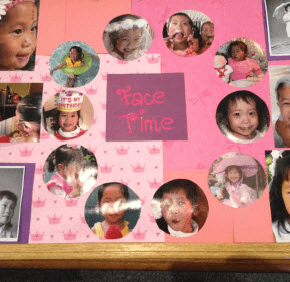 By George P. Matysek Jr.
gmatysek@CatholicReview.org
Twitter: @reviewmatysek
CATONSVILLE – Father Christopher Whatley is convinced that believers around the world have a powerful new friend in heaven. Her name is Teresa Bartlinski.
“This little girl is a saint,” said Father Whatley, speaking at the July 6 funeral Mass for Teresa, a 6-year-old St. Mark parishioner who died July 1 at Children’s Hospital of Philadelphia after a lifelong struggle with congenital heart disease.
The girl’s body had rejected a heart transplant performed at the end of June, and doctors were unsuccessful in implanting an artificial heart designed to keep her alive until a new heart could be found.
Standing in front of a tiny pink casket that held Teresa’s physical remains, St. Mark’s pastor told hundreds of the girl’s family members, friends and admirers that she did nothing wrong in the eyes of God, “but she has followed her Jesus.”
In heaven, Father Whatley said, Teresa has met all those who have gone before her. She took her place among them, he said, awaiting what the priest called her “crown of glory.”
“Now,” he said, “Teresa is our intercessor – our saint.”
Father Whatley encouraged everyone to ask Teresa what Christ wants them to do for him.
“Teresa will see to it that Christ speaks to us,” he said.
Born in China on Christmas Day 2006, Teresa was adopted by Ed and Ann Bartlinski in 2010. Teresa was the fifth Chinese girl with special needs adopted by the devout Catholic couple, whose family also includes four other children.
The Bartlinskis prayed intensely for a miracle for their daughter, sharing their story on a family blog that attracted a worldwide following.
During his homily, Father Whatley asked a deacon and a pastoral associate to hold a string of beads that stretched several feet in length and took up much of the sanctuary. Each bead had been given to Teresa by staff members of Children’s Hospital of Philadelphia each time the child displayed an act of courage during her medical ordeal.
“Though it may not match that of this tiny, innocent girl,” he said, “we are called to follow her in courage.”
Eddy Bartlinski, the eldest Bartlinski brother, told the congregation how his sister found joy in the simple things in life.
“She loved watching the sunset and the pink clouds that she called her princess clouds,” said Bartlinski, wearing a pink tie along with his brothers who stood behind him as he gave the eulogy. Teresa’s favorite color was pink.
“She loved picking flowers and asked how many flowers there were in heaven,” he said. “She loved being a princess and dressing up in her princess dresses and tiara, having tea parties and applying her lip gloss. Most of all, she loved Jesus.”
Several children and a few adults in the congregation wore tiaras in honor of Teresa, and a flower arrangement near the tabernacle was made in the shape of a crown.
Bartlinskis said his sister’s ability to see God in every person inspired him to do the same. He recalled that when Teresa received permission to have her first Communion at age 4, she said she was “marrying” Jesus. She was fond of saying, “I love you even more.”
“Those were her last words on earth,” Bartlinski said.
Denise Campbell, a neighbor, said she found it ironic that even though Teresa’s lungs were weak, she was able to “breathe life into everyone she encountered.”
“She showed us what life is truly all about,” Campbell said, “Love.”
Mary Scavilla, a friend, told the congregation she believes Jesus awaited Teresa with open arms.
“She was excited to see him because she knew him personally throughout her life with a depth of understanding and with a true connection that Jesus wants us all to strive for,” Scavilla said.
In the family blog, Teresa’s mother said her daughter’s life was the miracle the family had sought.
“Her life touched thousands of people all over the world,” Ann Bartlinski wrote. “Only by the power of God could a little orphan with half a heart touch so many lives. Now in heaven, she will touch many more lives.”
PrevNext