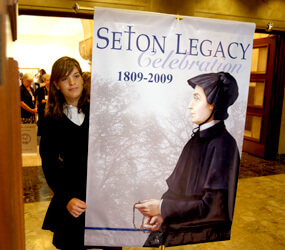 This is a corrected version of the story originally posted August 4. St. Elizabeth Ann Seton was declared venerable in 1959 and beatified in 1963.
EMMITSBURG – Peering through a glass display case, 9-year-old Gloria Whitfield was impressed with an old letter that rested on a 19th-century wooden writing desk.

Composed by St. Elizabeth Ann Seton in a flowing black script, the May 3, 1803 note was addressed to one of the saint’s daughters on the girl’s birthday.

“May Almighty God bless you, my child, and make you his child forever,” it said.

Establishing an up-close connection with the first American-born saint was a thrill for Gloria, a parishioner of St. Timothy in Centerville, Va. The youngster was equally impressed by a locket of St. Elizabeth Ann’s hair, relics and other historic artifacts on display at the visitor center of the Basilica of the National Shrine of St. Elizabeth Ann Seton in Emmitsburg.

“It’s cool,” said Gloria. “She did a lot for Catholic schools. She helped a lot of people.”

Gloria was one of about 1,000 people from across the country and around the world who converged on Emmitsburg Aug. 2 to celebrate a special Mass honoring the 200th anniversary of St. Elizabeth Ann’s arrival in the small Frederick County town.

The celebration also commemorated the 200th anniversary of the establishment of St. Elizabeth Ann’s Sisters of Charity of St. Joseph’s – the first new community for women religious in the United States.

The liturgy was the highlight of a weekend of events that also included the showing of a specially commissioned 30-minute documentary on the life of St. Elizabeth Ann and the dedication of the Seton Legacy Garden behind the stone farmhouse where she founded the Sisters of Charity on July 31, 1809.

Even though heavy rains washed out a planned Aug. 2 reenactment of St. Elizabeth Ann’s arrival into Emmitsburg in a Conestoga wagon, the bad weather failed to dampen high spirits among the many attendees at the Mass.

In his homily, Auxiliary Bishop Denis J. Madden said the key to St. Elizabeth Ann’s success was her “unlimited love and faith in God.”

“We celebrate the miracle of love personified in the person of Mother Seton,” said Bishop Madden, who was joined in the sanctuary by Cardinal William H. Keeler, retired Auxiliary Bishop William C. Newman and Vincentian Father G. Gregory Gay III – a Baltimore native and worldwide superior general of the Rome-based Congregation of the Mission (the Vincentians) and the Daughters of Charity.

“She responded to God’s will for her at every station of life,” Bishop Madden said.

Born in a prominent Anglican family in New York, St. Elizabeth Ann married William Magee Seton in 1794 and had five children. When her husband contracted tuberculosis, he accompanied his wife and eldest daughter to Italy in an effort to restore his health in a warm climate. He died in Pisa in 1803, leaving St. Elizabeth Ann widowed at age 29.

During her time in Italy, St. Elizabeth was inspired by the Catholic faith. On her return to the United States, she converted to Catholicism and was received into the church in New York on March 14, 1805.

Archbishop John Carroll of Baltimore invited St. Elizabeth Ann to Baltimore to serve as a school mistress. She arrived in Maryland in 1808 and lived at a small house on Paca Street next to the Sulpician-run St. Mary’s Seminary.

St. Elizabeth Ann professed religious vows in the lower chapel at St. Mary’s Seminary on March 25, 1809 in front of the archbishop. She and a small band of sisters left for Emmitsburg in the summer of 1809 to begin the Sisters of Charity of St. Joseph’s on 269 acres of land purchased for them by Samuel Sutherland Cooper, a St. Mary’s seminarian. She modeled her order on the Daughters of Charity of St. Vincent de Paul in Paris.

In 1814, her sisters opened the first Catholic orphanage in the nation, located in Philadelphia. They also provided ministry in health care, serving as nurses at St. Agnes Hospital in Baltimore.

“Elizabeth Ann Seton could see beauty in so much of life,” Sister Claire said.

Today, about 4,000 Sisters and Daughters of Charity minister in North America, according to Daughter of Charity Sister Betty Ann McNeil, archivist for the Emmitsburg province. They are active in education, parish life, social justice, health care and other ministries.

Sister Betty Ann said the bicentennial celebration was “very personal” for her. She was a student when Mother Seton was declared venerable in 1959, and a teenager visiting Emmitsburg when Pope John XXIII beatified St. Elizabeth Ann in 1963. Sister Betty Ann also was one of the youngest Daughters of Charity to attend St. Elizabeth’s canonization by Pope Paul VI on Sept. 14, 1975 in Rome.

“The sisters told us in 1959 that some of us would have to take their places to continue the community,” Sister Betty Ann remembered. “Fifty years later, I look out and say to these young people, how many of them are going to take our places?”

Sister Betty Ann called the bicentennial “a celebration of faith.”

“I hope it’s also been a celebration of call and response,” she said, “of responding to God’s call to live the word and sacrament.”