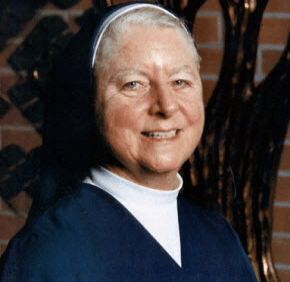 By Catholic Review Staff
A funeral Mass for Daughter of Charity Virginia Cotter was offered Jan. 18 at the Basilica of the National Shrine of St. Elizabeth Ann Seton in Emmitsburg. Sister Virginia died Jan. 12. She was 87.
A Massachusetts native, Sister Virginia joined the Daughters of Charity in 1951. She graduated from St. Joseph College in Emmitsburg with a nursing degree in 1956. She ministered as a nurse, hospital administrator and pastoral caregiver in Florida, Maryland, Michigan, New York, Virginia and Washington, D.C. She also served in a parish in West Virginia.
In the Archdiocese of Baltimore, she worked at the Seton Institute in Baltimore from 1956 to 1959, St. Agnes Hospital in Baltimore from 1962 to 1964 and Villa St. Michael in Emmitsburg from 1992 to 1997. She lived at Villa Michael from 2008 until her death.
To read more obituary articles, click here.
PrevNext