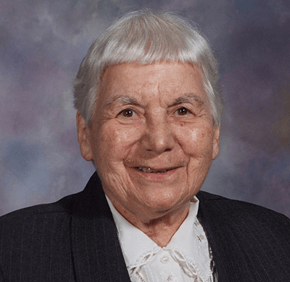 A funeral Mass for Sister of St. Francis of Philadelphia Regina Dengler will be offered April 8 at Assisi House in Aston, Pa. Sister Regina died April 3. She was 90 and had been a sister for 66 years.

A native of Baltimore, Sister Regina, formerly Sister John Ignatius, was a member of the former St. Katherine Parish and a graduate of Seton High School, both in Baltimore. Sister Regina ministered in pastoral care at St. Joseph Medical Center in Towson from 1992 to 1993 and 1997 to 1998.

A teacher, Sister Regina served the Archdiocese of Philadelphia for 32 years, the Diocese of Harrisburg for 14 years and the Diocese of Allentown for seven years.

From 1990 to 1991, Sister Regina served as provincial secretary at the former St. Anthony Province of the Sisters of St. Francis in Trenton, N.J.

For a decade, she ministered in social services and in pastoral care in the Diocese of Wilmington. From 1993 to 1997, Sister Regina worked on Maryland’s Eastern Shore at St. Martin’s House, a ministry sponsored by the Benedictine Sisters providing transitional services for homeless women and their children. From 1998 to 2004, she worked at Guardian Angels Day Care in Wilmington, Del.

In 2004, Sister Regina moved to Assisi House where she served in prayer ministry until her death.

Sister Regina earned a bachelor’s in education from Marywood University in Scranton, Pa. and a master’s in business education from the College of St. Rose in Albany, N.Y.

To see more obituaries for the Archdiocese of Baltimore click here.