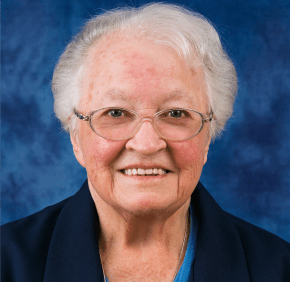 By Catholic Review Staff
A funeral Mass for Daughter of Charity Sister Maureen Delahunt was offered Jan. 10 at the Basilica of the National Shrine of St. Elizabeth Ann Seton in Emmitsburg. She died at age 86 Jan. 7 at Villa St. Michael in Emmitsburg.
Born in Moncton, New Brunswick, Canada, Sister Maureen entered the Daughters of Charity in 1961. She earned a bachelor’s degree in nursing from St. Joseph College in Emmitsburg in 1964, and in 1975 a master’s degree in mental health nursing from The Catholic University of America in Washington, D.C.
Her ministry included serving as nurse supervisor at the Seton Institute in Baltimore, 1966-73; and nurse and cottage supervisor at St. Vincent Infant Home, Timonium, 1980-81, when she also served as the local community superior.
She returned to Emmitsburg to serve as sacristan at the Seton Basilica, 2005-10, and as local community superior of Bethany Community, 2006-09. In 2010, she entered the ministry of prayer at Villa St. Michael.