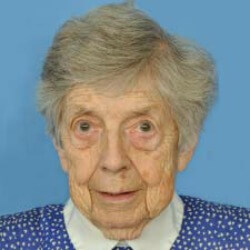 A funeral Mass was offered May 23 at Immaculate Conception in Towson for School Sister of Notre Dame Mary Noreen Brown. A Baltimore native, Sister Noreen died at age 98 May 15 at Villa Assumpta in Towson.

The oldest of nine children, Sister Noreen attended the parish school at Blessed Sacrament and then the Institute of Notre Dame, both in Baltimore. She delayed entering the congregation to help care for a new sibling, but did so after teaching one year at St. Mark School in Catonsville.

In the Archdiocese of Baltimore, Sister Noreen taught at the parish schools at St. Mary in Hagerstown, 1942-44, and St. Benedict in Baltimore in the 1950s. She returned to St. Mark in the late 1960s, and served at Mount Washington Country School for Boys, 1971-73. Her teaching ministry included schools in California, Massachusetts, New Jersey, New York, Pennsylvania, and the District of Columbia.

Sister Noreen was director of religious education at St. Joseph Parish in Sykesville, 1974-79, and spent the next 18 years in the Los Angeles area in a variety of positions, including in the bookstore of Loyola Marymount University. Moving to Villa Assumpta in 2006, she worked part-time at the Loyola University Maryland bookstore in Baltimore.