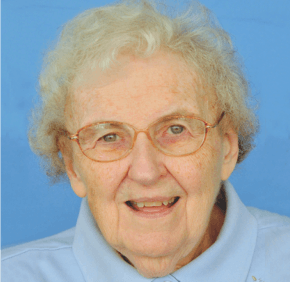 By Catholic Review Staff
A funeral for School Sister of Notre Dame Marguerite Mary Guidera at the Villa Assumpta chapel in Baltimore was held June 24. She died June 21 at age 85, and had served the School Sisters for 64 years.
Born in Baltimore, Sister Marguerite was educated by the School Sisters of Notre Dame, first at the parish school at St. Mary of the Assumption in Govans, then at Institute of Notre Dame, and finally at what is now Notre Dame of Maryland University, where she earned a bachelor’s degree in education in 1965.
She became a candidate for the School Sisters in August 1949, two months after her graduation from IND, and professed her first vows in 1952.
In the Archdiocese of Baltimore, she taught at the parish school at St. Jane Frances de Chantal in Riviera Beach, 1960-69, and then at her home parish in Govans, at St. Mary’s School, 1969-72. In 1972, she began a 30-year stint at Notre Dame Preparatory School in Towson, where she ministered in the middle school as a teacher, administrative assistant and admissions director, often handling multiple positions simultaneously.
Sister Marguerite was diagnosed with multiple sclerosis in 1955, and according to the School Sisters, came to terms with disease, joking that therapy was a time to “go and dance again.”
Sister Marguerite also taught at schools in Irvington, N.J., Brooklyn, N.Y., and Tampa, Fla.
Burial was at Villa Maria Cemetery in Glen Arm.
See more obituaries here.
PrevNext