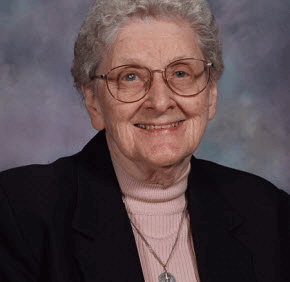 By Catholic Review Staff
A funeral Mass for Sister of St. Francis of Philadelphia Irma Francis Godsil was to be offered Jan. 29 at Assisi House in Aston, Pa. Sister Irma Francis, who had been a professed member of the Sisters of St. Francis of Philadelphia for 74 years and ministered in the Archdiocese of Baltimore for 54 years, died Jan. 22. She was 92.
Born in County Cork, Ireland, Sister Irma Francis joined the Sisters of St. Francis in 1937. She earned a degree from Mount St. Mary’s University in Emmitsburg in 1956. She was an educator for 54 years in the Archdiocese of Baltimore. She taught at St. Elizabeth School, Baltimore (1940-1947); Immaculate Conception School, Towson (1947-1955); St. Peter Claver School, Baltimore (1955-1958); Shrine of the Little Flower School (1958-1962); St. Clement School, Rosedale (1968-1969); Our Lady of Mount Carmel School, Middle River (1975-1985); and St. Joseph School, Fullerton (1985-1998). After her retirement she lived at St. Anthony parish and volunteered at Magnolia Manor/Parkside House in Catonsville from 1998 to 2006.
Sister Irma Francis also taught in Florida, North Carolina, Oklahoma and South Carolina. She ministered to residents of Assisi House, her community’s retirement convent, from 2006 to 2010. She moved in 2010 to Assisi House, where she lived until her death.
To read more obituary articles, click here.
PrevNext