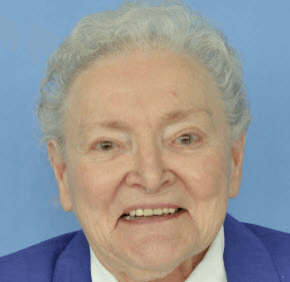 By Catholic Review Staff
A funeral Mass for School Sister of Notre Dame Dorothea Marie Lauttman was offered Sept. 12 at the chapel at Villa Assumpta in Baltimore. Sister Dorothea died Sept. 6. She was 83 and had been a member of the School Sisters of Notre Dame for 63 years.
A native of Baltimore, Sister Dorothea attended the former St. Andrew School and Notre Dame Preparatory School in Towson.
She professed first vows in 1950 and final vows in 1956.
Sister Dorothea ministered for 50 years as a teacher and school principal at Catholic schools in the Archdiocese of Baltimore.
From 1950 to 1960 she taught at St. John’s Literary Institution in Frederick, which is now St. John’s Catholic Prep in Buckeystown.
From 1960 to 1966 she taught at St. Mark School in Catonsville.
In 1966, Sister Dorothea was named principal of the former Our Lady of Good Counsel School in Baltimore. She ministered at the former parish school for four years before serving as principal of St. Paul the Apostle School from 1970 to 1973 and Church of the Resurrection School from 1973 to 1981. Both Ellicott City schools have since merged to form Resurrection-St. Paul School in Ellicott City.
She taught at the former Madonna School in Baltimore from 1981 to 1985, St. Charles School in Pikesville from 1985 to 1989 and Holy Family School in Baltimore in 1989 to 1999.
In 1999, she retired from teaching and ministered in community service for her province.
She returned to Notre Dame Prep where she resided in the convent and volunteered.
In 2012 she moved to Villa Assumpta.
She earned a bachelor’s in education from Notre Dame of Maryland University in Baltimore and a master’s in education administration from Villanova University in Villanova, Pa.
For more obituary articles, click here.
PrevNext